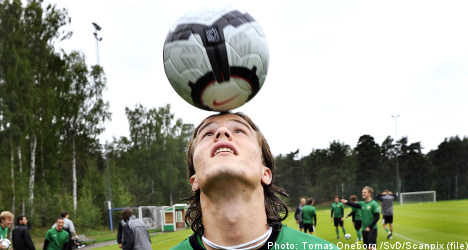 “It’s a bit of a bummer to fall at the goal line,” Hallenius told the Aftonbladet newspaper following the ceremony.

“It was the best looking goal, if I weren’t going to vote for my own.”

Hallenius was nominated for the FIFA Puskás Award after netting an astonishing goal in June 2010 for Hammarby against Syrianska FC in Sweden’s Superettan league.

“He made a wonderful goal for his former club Hammarby. If you watch the goal, it’s fantastic. I’m not sure he will score so many goals in the same way again. He will be a great football player in the future,” Swedish Football Association (Svenska Fotbollsförbundet) chairman Lars-Åke Lagrell told The Local on Monday.

The goal has been likened to a similar unforgettable play by Dutch striker Marco van Basten more than 20 years ago during the Euro 1988 final.

“Linus Hallenius! The ball never touches the ground; he uses his chest, both right and left foot and he lobs over and spins around a defender. Finishes with a shot worthy of Puskas. Pure magic!” a commenter on FIFA.com wrote about the goal earlier this year.

Hallenius, 21, now plays for Genoa in Italy’s Serie A and is up against nine other players for the award, many of whom won nominations for amazing plays during the World Cup in South Africa last year or Euro qualification.

In the end, it was Turkey’s Altintop who took home the prize for a volley off a corner kick which he sent sailing into the back of the net from the top of the penalty box in a Euro 2012 qualifier against Kazakhstan in September.

Ahead of the ceremony, Hallenius had been considered a top contender for the award. The site accompanying the video for his goal has a 4.7 out of 5 star rating.

Hallenius scored 18 goals in 23 matches last season in the Superettan. The striker has not yet made his debut for Genoa as he nurses an injury that has kept him away from the pitch since the autumn.

“He is young, but he is a great talent. I think he will be outside Sweden for some years. He will play in the Italian league now, but it’s normal for Swedish players to come back in the future,” said Lagrell.

The winner of the award was determined by online voting, something which likely didn’t work in Hallenius’s favour.

“It might have been easier if 70 million people lived in Sweden,” he told Aftonbladet.

The FIFA Puskás Award was established in October 2009 and is named after Hungarian footballing great Ferenc Puskás.

Portuguese forward Cristiano Ronaldo won the inaugural award for a goal against Porto while playing for Manchester United during the UEFA Champions League.