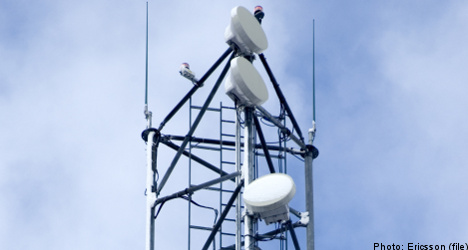 Ericsson has received an order for northern Norway, which is home to only about 20 percent of the country’s population, while Huawei has won a contract to build out the mobile network in southern Norway.

“TeliaSonera choosing us to modernise the network is an important milestone in our cooperation,” said Jens Friberg, sales manager at Huawei in charge of business with TeliaSonera.

TeliaSonera, which is battling Telenor for market leadership in the Nordic region, is at the forefront of the 4G network roll-out, which offers speeds 10 times faster than 3G.

The company’s first 4G network, which was also the world’s first, was inaugurated at the end of 2009 in Stockholm and Oslo.

TeliaSonera today offers 4G capabilities — so far limited to mobile internet and not yet available for phones — in Sweden, Norway, Finland, Estonia and Denmark.

The order includes the modernising of the country’s 2G and 3G networks, as well as the expansion of its 4G network. Data traffic is growing rapidly and a modernisation of the networks is necessary, Ericsson said in a statement.

“We are glad to be part of that journey and proud that we are now also TeliaSonera’s vendor within 2G and 3G in Norway,” said Robert Puskaric, head of Ericsson in northern Europe and Asia.

Work will begin immediately and be completed in 2012. The company did not disclose the value of the order to Huawei.

“We have selected Huawei and Ericsson to deliver the network based on their high quality technology and competitive total solution,” said Claes Nycander, chief technology officer for mobility services at TeliaSonera, in a statement.

Huawei, which was founded more than two decades ago, has in recent years experienced booming growth at the expense of the historic majors in the telecom equipment sector — Ericsson, Nokia Siemens and Alcatel-Lucent.

At the end of 2009, the Chinese company won contracts in Sweden with Norwegian operator Telenor and Sweden’s Tele2 for their 4G network roll-outs, completed late last year.

Huawei had previously threatened to unseat Ericsson from 4G contracts with TeliaSonera, but had until now only been handed a deal to provide equipment to part of the Oslo network.

Huawei currently has 700 employees in the Nordic countries. Friberg estimated that the figure will increase by 10 to 20 percent over the next year.

“We have grown incredibly quickly here in the last few years. We have extensive recruitment going on now, both in Sweden and other Nordic countries,” he said.

“We have no clear commercial goals for the Nordic market, but we will continue to invest in it. Sweden is far ahead in terms of telecoms and is a strategically important market,” he added.

In Sweden, Huawei has three offices with about 350 employees working in research and development.

Following the news, Ericsson saw its share price fall slightly, but it inched back up 0.46 percent to 76.35 kronor ($11.09) in midday trade on a Stockholm Stock Exchange up 1.44 percent.