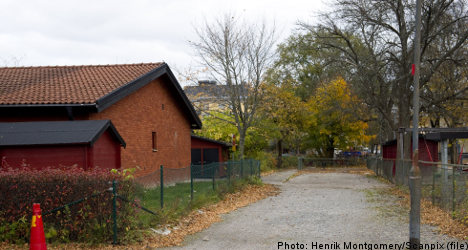 Egnahemsgatan in Örebro, where a man is suspected of raping a 64-year-old woman

He is now in detention for a total of 14 assaults against women, Örebro district court announced on Tuesday. If he is convicted for all of the crimes, he would become the worst serial rapist in Sweden’s history.

Although he admitted to the new offenses, he objected to the previous classification of the attempted robbery as an attempted rape in connection with an assault in Örebro’s Varberga district.

He admitted that his intention was to try to rob the woman, which the district court accepted. As a result, the charge was changed to attempted robbery.

“The man told the court about his actions, but he could not explain why he did what he did,” deputy chief prosecutor Pia Åsberg told news agency TT on Tuesday.

She believes that the man will not be suspected of more crimes.

“It stands at 14 crimes, but I am not entirely sure,” she added.

Lawyer Margaret Arvidsson, who is defending the suspect, said her client felt an internal compulsion when he committed his crimes.

“He had conflicting emotions. He felt that he had to commit the crime and at the same time, that he should not do it,” she explained.

According to Arvidsson, the suspect is fairing well, but is considered the restrictive conditions of his detention as quite difficult.

Åsberg estimated that she will be able to formally charge the suspect in mid-February.

According to Åsberg, there are no plans to question him about additional crimes. The charges will be filed on February 7th, but the investigation will probably not be completed by then.

A number of media outlets were present at Örebro district court on Tuesday afternoon for a separate hearing for the suspect in the murder and dismemberment of an Örebro University professor whose body was found on Monday.