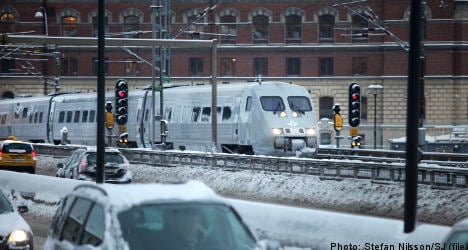 In addition, more than half of the country’s freight trains were delayed during the same time period.

“It is incredibly bad punctuality. We must do better,” said Tommy Jonsson, head of the railway department of the agency.

From November to December, the percentage of passenger train delays doubled from 14 percent to 28 percent.

Although many factors were involved, including falling overhead contact wires in Östergötland in eastern Sweden and new contractors on several tracks, the snow was the main culprit.

“Just like the roads, we have to plough the tracks. The trains have to go after the plough locomotive on the railroad, which results in delays,” said Jonsson.

First up is a Saturday departure between Malmö and Stockholm, which Ladbrokes will pay out eight times the money if it arrives on time, the report said.

“Train travel and delays are a big thing that affect many, so we believe that we can reach out and interest others who normally bet on just sports, for example,” Andreas Gillberg, the Nordic manager at Ladbrokes, explained to SvD.

“It can be like a plaster on the wound for those who take the train. One loses if one bets it will be delayed, but it arrives on time and if one is late, you get a little extra,” Gillberg told SvD.

National rail operator SJ will release its December statistics on punctuality in the next week.

“One can ask how sustainable the business is when it comes to transporting goods by rail,” said Jonsson.

However, he emphasised that much of the freight traffic comes from other countries and that railways across Europe were paralysed by snow in December.

Late last year, the agency turned to antique rolling stock to clear a stretch of track in southern Sweden while admitting that costs for the harsh winter were expected to skyrocket the same day Stockholm’s Arlanda Express to the airport ground to a complete halt in the morning.