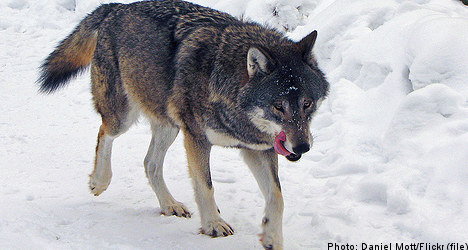 “We think that reproduction has been higher than expected and if we aren’t allowed to shoot more wolves, the pack is going to end up being too large,” Tomas Andersson, chair of the Swedish Hunters Association (Jägareförbundet) chapter in Örebro County in central Sweden, told The Local on Thursday.

Sweden’s second annual wolf hunt is set to start on Saturday and before the hunt is over, Sweden may find itself the subject of a European Commission effort to put a stop to the hunt.

“We’re probably going to have few other alternatives than to launch a formal process against Sweden and that can happen as early as the end of January,” Joseph Hennon, spokesperson for EU Environment Commissioner Janez Potocnik, told the TT news agency.

Both the licensed hunting of wolves and the set limit of the number of wolves in the country, as well as plans for the transfer of wolves from other countries, include elements that seem incompatible with EU rules for the conservation of predatory animals, Potocnik stressed.

Last year, the Swedish parliament decided last year to limit the wolf population to 210 animals spread out in 20 packs with 20 new pups per year for a period of five years by issuing hunting permits in regions where wolves have recently reproduced.

During this year’s hunt, which runs from January 15th to February 15th, licensed hunters will be permitted to shoot 20 wolves, down from the quota of 27 animals this year.

However, hunters in Örebro county in central Sweden claim that they ought to be able to shoot more than county’s current quota of just two wolves.

Andersson explained that new information indicates that a record number of wolf pups, 25 to 27, were born in the county in the past year.

His organisation has launched an appeal with Swedish Environmental Protection Agency (Naturvårdsverket) to increase the county’s wolf hunt quota from two to four animals.

“Like everyone else, we’re trying to reach the goal set by the Riksdag,” Andersson said.

He admitted, however, that his organisation supports a lower quota of 150 wolves in Sweden and around 200 for the whole of Scandinavia.

“We want to limit the damages caused by wolves by reducing the pack’s density,” he said.

According to Andersson, attacks on hunting dogs are one of the biggest threats posed by wolves to Sweden’s hunters.

“It’s like playing Russian roulette. The more wolves there are, the greater risk there is that our hunting dogs will be killed,” he said.

Andersson estimated that 300 to 350 hunters were registered to scour Örebro’s 8,519 square kilometres in search of two wolves to kill.

Sweden’s Green Party is also critical of the hunt, accusing the government of making a “grave mistake” in allowing the hunt to continue this year.

“Despite criticism from the European Commission and other quarters, the government has decided to follow through with a policy means confirming the wolf is fair game rather than working to increase acceptance,” said Green Party MP Tina Ehn in a statement.

Speaking with the Dagens Nyheter (DN) newspaper, Environmental Commissioner spokesperson Hennon explained that the wolf is protected and killing protected species is prohibited.

He also questioned the rationale given by Sweden that the wolves are being shot in order to remove individuals with bad genes from the population.

“Are wolves being shot because they have genes or because they are the first ones you happen to see? It’s not especially scientific,” he said.