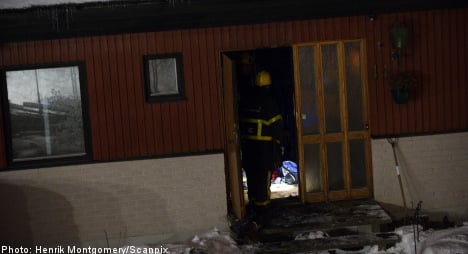 Emergency services received a call about the fire around 5.30pm on Thursday.

“Someone saw flames coming out from the door,” Ibstedt told the TT news agency.

When fire crews arrived on the scene nine minutes later, the fire was raging.

Firefighters quickly found the three victims, a man and a woman in their seventies, and a young boy.

Two of the victims were found just inside the door, while the third was found farther inside the house.

By around 6pm, just 30 minutes after receiving a call about the fire, crews had extinguished the blaze.

“It’s not totally destroyed, but several rooms are burned and they have fire damage,” Jonas Fröjmark of the Stockholm fire department told TT.

According to a Scanpix photographer who was on the scene, the house looked relatively intact from the outside, but signs of the fire could be seen through the windows.

A preliminary forensic assessment has been conducted into what may have caused the fire.

“It’s most likely that the fire started in the television,” said lead police investigator Håkan Melin to TT on Friday afternoon.

Note: an earlier version of this article indicated that the boy mentioned in the story was 10-years-old. That information has now been updated.