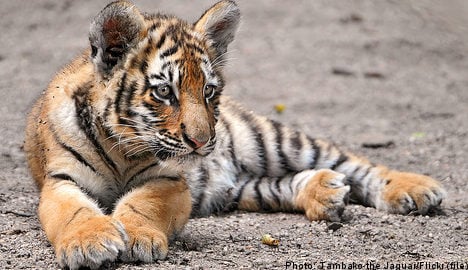 After a feeding of the eight Siberian tigers on Monday, zoo officials realised that six-month-old Sergei was missing.

He was later found lifeless at the feeding station and as soon as they could get to him, they realised he was dead.

The wildlife park between Norrköping and Nyköping two hours southwest of Stockholm participates in an international breeding program for Siberian tigers, Aftonbladet reported on Friday.

Only about 400 Siberian tigers are left in the wild in China and Russia, with about the same number in zoos around the world, according to the zoo. A number of Siberian tigers are also illegally owned by private individuals, but their number is unknown.

Many litters have been born at the zoo before, which has also sent tiger cubs to other zoos.

Sergei’s sister Kalinka, who was born at the same time, is the only Siberian tiger cub remaining at the zoo. The siblings were isolated from the other tigers until the autumn in order to protect them.

“We conducted the introduction carefully and thoroughly. It usually goes well. We thought we had achieved the goal,” Höggren told Aftonbladet.

An autopsy performed on Sergei revealed that an adult tiger had bitten him to death, but the zoo will never know which one, the report said.

“Unfortunately, this is what happens, even in the wild. We want the animals in as natural an environment as possible and not tame them,” Höggren told the newspaper.