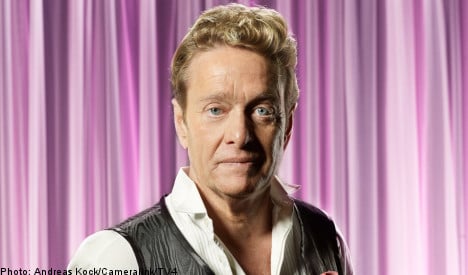 Björn Ranelid is an award-winning Swedish author and current Let’s Dance contestant who is in love with the media, himself but also the world around him. There is simply no one like him, which he happily agrees with. Ranelid walks different but more than anything; he talks differently – something he happens to do a lot. The Swedes have even given his language a name; Ranelidish. Yes it’s true, the man has got his own language.

What? Different from Swedish?

I shall explain. Imagine standing looking at a view with this guy. He wouldn’t say “Oh, what a beautiful sight.” No. Instead he would say – in a thick Skåne accent – “Oh, can you see how the night sky falls in, wrapping the trees in a velvet duvet.” Ranelid could go on like that for hours. He is very poetic and adores metaphors.

He just sounds like one of those red wine and cigarette types. A total cliché.

God no, Ranelid wouldn’t touch a cigarette. Just like he worships himself and everything around him, he worships his athletic body. The man looks great for his age (61). He is very tanned, too.

I can tell you’re not impressed. People either love him or hate him. He has many fans among the Swedish celebrities – they think he’s a genius. However, there are those who don’t hesitate to criticise him…

Do tell me more.

Well, a few years ago there was a massive thing in the press when Swedish writer Linda Skugge criticised of one his books. She combined it with criticism against him as a person, saying that he wore lip gloss, among other things. Ranelid got furious and many writers got involved in a debate about just how mean you’re actually allowed to be in a review.

He got really upset actually. Apparently it’s an illness. His lips are quite white you see.

Anyway, old Björn has been splashed all over the tabloids again recently after Peter Englund, the secretary of the Swedish Academy (you know, the Nobel Prize folks), backhandedly praised Ranelid’s participation on the current season of Let’s Dance when he wrote on his blog that ”everything that keeps Ranelid away from writing is a good thing.”

Very harsh, I know. Englund is probably after some media attention himself.

No, I mean the fact that Ranelid is in Let’s Dance. What a sell-out!

Don’t be like that. I have told you he loves the media! And the relationship is very equal.

I wouldn’t care reading about him. Never mind watching him dance.

Now stop it. Ranelid is adorable.

You are obviously on his team, Ranelid-lover!

How couldn’t you be? You’re just jealous because you don’t have your own language!

Check out Ranelid’s appearance on Filip & Fredrik’s Boston Tea Party (in Swedish) from 2008: