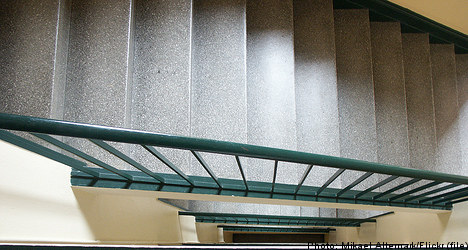 No one has been made and the suspects remain at large, Malmö police reported on Saturday.

At around 9pm on Friday evening, police were dispatched to Kantatgatan in southern Malmö’s Lindängen district after receiving a report that a man had been shot in the leg. He also received a blow to the head.

Police are looking for two suspected offenders in their 20s. As of early Saturday morning, the two men remained at large.

The man and his wife had earlier spoken to the two young men who were hanging out in the staircase. They left, but later returned, after which the row erupted, culminating in the shooting, according to Bo Paulsson, internal officer in command at the Malmö police.

“We have conducted a technical study and found prints and empty shell casings,” Paulsson told news agency TT on Saturday.

Police have also knocked on doors in the area while searching for the two suspected offenders. Paulsson did not reveal what kind of weapon was used in the attack.

The man was taken to hospital by ambulance. He was slightly injured, according to Malmö Hospital, but remains hospital for observation, newspaper Sydsvenskan wrote on its website on Saturday.

The man who was shot was not previously known to police.