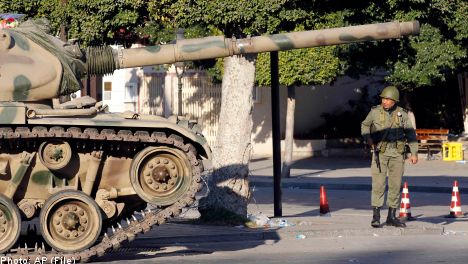 A total of four planned trips from Sweden at the start of the Tunisian tourism season, between April 15 and May 6, had been cancelled, affecting some 300 tourists, said Apollo, a Swedish subsidiary of Swiss travel giant Kuoni.

“For trips after May 6, Apollo will wait a few more weeks before making its decision” on whether they should be cancelled, the tour operator said in a statement.

Tunisia is one of Apollo’s top summer destinations, with some 30,000 tourists traveling with the operator last year to the Sousse and the Gulf of Hammamet regions south of Tunis.

Sweden’s foreign ministry tightened its travel recommendations to Tunisia Sunday, cautioning against all travel to the country.

Some 300 Swedish tourists are currently in Tunisia, while some 600 Swedes are residents in the country.

A group of 12 Swedish wild boar hunters, who had traveled to Tunisia nearly two weeks ago with another operator, were on Sunday caught up in the violence wracking the country following the ouster of strongman leader Zine El Abidine Ben Ali late last week.

The Swedish hunters were in three separate taxis heading towards the airport when they were stopped at a checkpoint, dragged out of the vehicles by an angry mob and beaten, one of them said.

“They searched the vehicles. They found our rifles and everything degenerated,” Ove Oberg told reporters at the Africa hotel after the ordeal Sunday.

“They dragged us out of the cars, treated us like foreign terrorists. We were kicked and beaten,” he said.

The Swedish foreign ministry said Monday that all the men had been accounted for and were in safety at their hotel where they were waiting to be flown home.