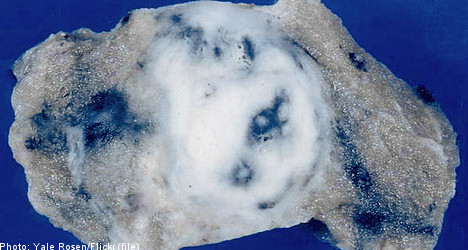 It is unclear whether anyone was infected by her and her current whereabouts are unknown, Göteborgs-Posten (GP) reported online on Wednesday.

The infection was discovered when the woman sought help for her condition, but she refused to state the sexual contacts she had had, as required by law. She also declined to participate in the investigation, the report said.

“It means that we do not have a clue how many sexual contacts she had. But it is urgent that men who may have come in contact with her seek help if they suspect they may have become infected,” Leif Dotevall, an assistant infectious disease control officer in Gothenburg, told GP.

Syphilis is a bacterial infection that is easily spreads through all types of unprotected sex. It is relatively rare in Sweden, but cases continue to be reported. Without treatment, the disease can cause serious damage to the heart and brain, the report said.

In western Sweden’s Västra Götaland county, 11 cases of the disease were reported in both 2008 and 2009. In Sweden and other western countries have seen an upward trend in syphilis cases, particularly among men who have sex with men, according to GP.

“The cure is antibiotics. The disease can be completely cured with daily intravenous injections of antibiotics. Men who have cloudy genital sores and bought sex in the autumn should visit a health care facility or go to a dermatologist or STD outpatient clinic,” Dotevall told GP.

With timely detection, syphilis can be easily treated. However, Dotevall warned that among prostitutes, it is common, along with other sexually transmitted diseases, and one concern is that HIV could spread in a similar fashion, the report said.