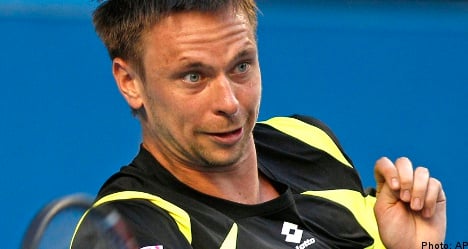 The in-form fourth seed advanced on the back of a 6-3, 7-6 (7/1), 6-1 win over Gilles Muller of Luxembourg and will now face Czech qualifier Jan Hernych in Saturday’s third round.

“It’s good that I didn’t spend five hours on the court. Instead, I’ve played two matches and both went to straight sets. I played very good, so I’m not feeling tired at all, which is very good now coming into the third round,” Söderling said.

Söderling reached the third round of the season-opening major for the first time after just two wins in his previous five visits to Melbourne.

“I feel like I’m playing really well and I have a lot of experience from doing well in other Grand Slams, so hopefully this year it will change,” he said.

Söderling has reached the quarter-finals or better at every Grand Slam event except the Australian Open. He finished as runner-up at Roland Garros in 2009 and last year lost to Rafael Nadal in the final.

The Swede also reached the quarter-finals at Wimbledon last year, losing again to Nadal, and at the 2009 and 2010 US Open, losing to Federer both times.

Söderling is currently on a 7-0 winning streak this year after winning the Brisbane International, where he defeated Andy Roddick in the final and reclaimed the fourth-best ranking overall from the UK’s Andy Murray.