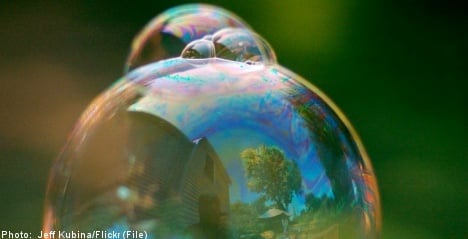 “But this is a difficult matter. One cannot exclude that there is a certain overvaluation that may be due to some over-optimism in terms of the continuing development of interest rates,” she said at a hearing on the development of the housing market by Sweden’s parliament’s, the Riksdag’s, finance committee.

Wickman-Parak said that the growth in Swedish household debt was alarming. Borrowing is increasing by 8 percent per year, which is unsustainable at current levels.

“We have a debt ratio that we have not seen anything equivalent to,” she said.

Despite the warnings, Financial Markets Minister Peter Norman sees no immediate threat of a bubble developing in the housing market.

“There is no immediate threat to financial stability, but we are concerned that the threat could extend in the future,” he said.

According to Norman, there are several measures that the government can resort to if it becomes necessary, but there is no need for them so far. Without specifying what could be done in the first place, Norman suggested several possibilities.

They include reducing the opportunities for the deduction of interest expenses, abolishing interest deductions for consumer credit, amortisation requirements, changes in capital coverage requirements for banks and stamp duty.

“There are a large number of tools and the government is largely prepared to intervene,” he said.