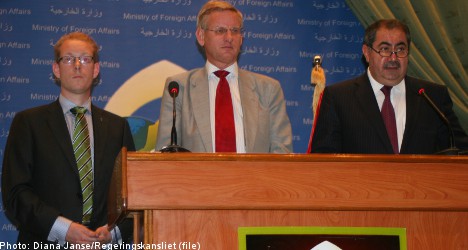 Bildt and Billström are the subject of renewed criticism following the revelation. At the time, Bildt stated Sweden’s demands for a tougher immigration policy. The opinions were expressed during a meeting between the two ministers and a US ambassador.

Bildt and Billström attended a breakfast meeting with then-Swedish ambassador to Iraq Niclas Trouvé and then-US ambassador to Iraq Ryan Crocker, according to the classified documents on Iraqi immigration to Sweden, Swedish newspaper Svenska Dagbladet (SvD) reported on Friday.

The problem was the Iraqis that Sweden did not want to grant residence permits to. Bildt wanted an agreement with Iraq on the return of these asylum seekers. Without one, it would have been impossible to establish a Swedish embassy in Baghdad, said Bildt, according to the documents.

“Without rules and regulations for sending those without permits back, the immigration problem would be out of control in a country of 9 million inhabitants,” Bildt allegedly said.

The ministers also spoke about several honour killings in Sweden, which led to demands from the Swedes to a stricter immigration policy.

Several politicians, among them Ceballos, have reacted strongly against the remarks. She believes that the adaptation to the Sweden Democrats’ agenda is illustrated in the WikiLeaks documents.

“On the part of the Moderates, they have adapted to the xenophobic forces, which [Prime Minister Fredrik] Reinfeldt said that they would never do,” she said.

On Friday morning, Green Party foreign affairs critic Bodil Ceballos announced she was considering reporting Bildt and Billström to the Swedish parliament’s, the Riksdag’s, committee on the constitution in the wake of the remarks.

Ceballos said that the reasons that Bildt and Billström have referenced for limiting the number of Iraqi refugees should not be the deciding factors for the Swedish authorities.

“The Swedish National Migration Board [Migrationsverket] should decide on the basis of each person’s protection needs, not based on whether they are easy to integrate or whether they come from areas where honour-related violence occurs,” she said.

Like several others, Cecilia Wikström, European Parliament member for the Liberal Party, hoped that the ministers were misquoted.

“It is appalling rhetoric. I really hope and do not want to believe that they may have said something so abominable,” she told SvD on Friday.

Centre Party member Fredrick Federley commented that he himself would not have used such language.

Neither Bildt nor Billström have commented on any documents released by WikiLeaks.

“Due to the fact that it is a wikileaks document, we will not comment on it,” Bildt’s press secretary Anna Charlotta Johansson told The Local on Friday.

Emma Henriksson, migration policy spokeswoman for the Christian Democrats, found the documents “troublesome” and said that she would bring them up with Bildt when she meets with him next week and ask if they are actually true.

“I wouldn’t have thought that this would be the way someone representing the Swedish government would express themselves. From the first quote, you can’t really see if it is Carl Bildt’s words or if it is the way he put it,” she told The Local on Friday.

The use of the term “illegal aliens” to describe the Iraqi asylum seekers concerned Henriksson the most.

“The quotes called the refugees illegal, but a person cannot be illegal. Perhaps they weren’t entitled under our rules to have asylum here, but it’s not illegal to seek asylum,” she pointed out.

Henriksson believes it is timely that the report came out just after Sweden deported 20 refugees back to Iraq on Thursday.

“I don’t think it’s ironic, but perhaps timely. We have a lot of refugees from Iraq. It is important that we give each and every one of them the possibility to seek asylum. If they are not entitled to seek asylum, then we try to help them return to Iraq and help them in different ways,” she said.

“Among the Christian minority, there are a number who are not entitled to asylum, it is very troublesome,” she added.

Henriksson added that it is important that the migration board has the most updated and accurate information about minorities in Iraq and their situation present situation given that the conditions can change from week to week.

“It is important for the European Court of Human Rights to look at their cases to see if they should go back or if they should have intervened. They looked through all their cases and situations and there were no grounds for the court to tell the Swedish state to intervene,” she said.

“I think we still need to improve our knowledge of the situation so we don’t send back the wrong people,” she added.