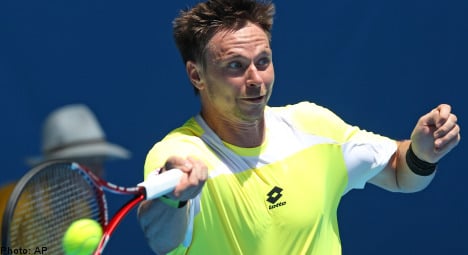 Fourth seed Söderling , a two-time French Open finalist, was always in control of his match on Hisense Arena, winning 6-3, 6-1, 6-4 against the 241st-ranked Hernych in just under two hours.

The Swede, who receives encouraging phone calls and text messages from Swedish legend Björn Borg, is unbeaten in eight matches this year as he looks for a more aggressive approach under new Italian coach Claudio Pistolesi.

“Physically, I feel very good. I haven’t spent too many hours on court and I’m already in the fourth round, which is very good and an advantage for me,” Söderling said.

Söderling , a runner-up to Rafael Nadal and Roger Federer at the past two French Opens, holds no fears about the prospect of bumping into the Grand Slam kings later in the tournament.

The powerful Swede conquered Nadal in the round of 16 at Roland Garros two years ago and overcame Federer in the quarter-finals of last year’s French Open.

“I have already played two Grand Slam finals and I have beaten them both in Grand Slams,” he said.

“But, of course, they will always be the favorites, and we are the guys who need to play really well if we’re going to have a chance to beat them. Every match (against them) I will always have a chance.”

Söderling is on track to face fifth seed Andy Murray in the quarters and possibly world number one Nadal in the Melbourne semi-finals. He said he is pleased with the results he has achieved with Pistolesi.

“So far it has worked very well. We haven’t lost a match yet together and not many players can say that,” he said.

“But still it’s very fresh. We had a couple of good weeks during the off-season.

Söderling also said he was happy with the support he receives from Borg, who only two won matches at the Australian Open despite claiming 11 Grand Slam titles.

“We meet sometimes, and sometimes he calls me, sends me texts. It’s nice,” he said.

Söderling previously had a poor record at the Australian Open after only winning two matches in five previous visits, but victories this year have put him into the last 16 where he will face Ukraine’s Alexandr Dolgopolov.

Dolgopolov knocked 2008 finalist Jo-Wilfried Tsonga out of the tournament in five sets on Saturday.

The Swede was rock-solid from the baseline, hitting 14 forehand winners among his total of 33 winners and broke Hernych’s serve a total of six times, three in succession in the second set.

Söderling has reached the quarter-finals or better at every Grand Slam event except the Australian Open.