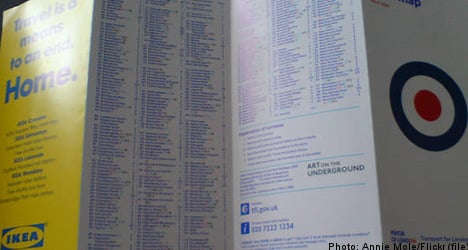 “It is so well done and so cunningly done that I have little doubt that it is intentional,” Professor Alan Penn of University College London told the UK’s The Times on Saturday.

Ikea has denied the findings. Wandering through the store provides inspiration and there are shortcuts to all departments, Ikea Sweden’s head of communications Ivana Flygare told Aftonbladet on Sunday.

Penn presented his findings at a lunch hour lecture on Tuesday after investigating an Ikea store in London, newspaper The Scotsman reported on Sunday.

He concluded that Ikea’s success is due in part to the confusion customers experience in their stores, which are designed like mazes. According to the report, customers are forced to walk through the entire store before they can leave.

Penn noted that customers who followed the path guided by arrows on the ground quickly became disoriented and lost track of the direction of the exit, the report said.

“It’s more S&M than M&S,” he said during the lecture, which was posted on YouTube on Wednesday, referring to UK department store chain Marks & Spencer.

He acknowledged that all stores have shortcuts due to fire regulations, but they are never in the customer’s field of view, he said.

“The way to the exit is always behind you,” he said.