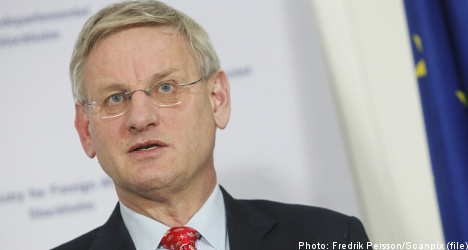 Separately, political scientists have observed that the ministers were caught by surprise with the revelations.

The fallout from Bildt and Billström’s refusal to answer questions about the documents released on Friday have persisted throughout the weekend as the pair maintained their silence.

The leak pertained to comments made by Bildt and Billström at a meet with the then-US ambassador to Iraq in 2007. On Friday, neither Bildt nor Billström commented on the documents on the grounds that they do not discuss anything related to WikiLeaks.

Billström broke his silence in a statement on Saturday evening, writing, “I have not said anything to the American embassy in Baghdad on Swedish asylum policy than what I have said publicly in Sweden. However, I have no views on what the American embassy staff wrote in their reports.”

According to documents from WikiLeaks, at the meeting, Bildt allegedly said that he wanted an agreement with Iraq on the repatriation of Iraqis who were not granted residence permits in Sweden. With the agreement, there would be no way to establish a Swedish embassy in Baghdad, according to Bildt.

The two ministers were also reported as mentioning that several honour killings in Sweden had resulted in the Swedes calling for a tougher refugee policy.

Social Democratic leader Mona Sahlin was extremely critical of what Bildt and Billström’s alleged comments at the meeting.

“I am usually cautious about using words such as disgraceful, but this is a scandal,” she told newspaper Svenska Dagbladet’s (SvD) online edition on Saturday.

Sahlin also found it remarkable that Bildt and Billström chose not to comment on the documents and said that the ministers “must sort out what it is.”

Green Party spokesman candidate Gustav Fridolin was also critical of the ministers, while the Liberal Party’s youth wing has called for Billström to resign.

Marie Demker, a professor of political science at Göteborg University, noted that the politicians must used to the situation that currently prevails.

“Our elected officials must realise that leaks as those from WikiLeaks have become the norm. They [Bildt and Billström] seem a bit taken by surprise. It appears as if they did not really prepare for this,” she said.