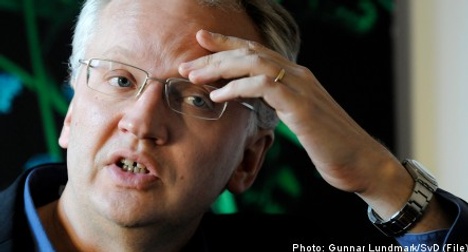 “I don’t want to and will not be running. Nomination committee chair Berit Andnor, with whom I’ve spoken with, also knows this,” Nuder wrote in an email the TT news agency.

“She can confirm that I am not making myself available and will not do so.”

Nuder first waved off speculation about his potential candidacy in the autumn shortly after Sahlin announced her decision to resign from the party leader post.

At the time, Nuder explained that he had left politics two years earlier and stressed that it was a “well thought through decision.”

After 30 years in Swedish politics, 20 of which put him at the centre, Nuder told TT at the time that he wanted to do something else with his career before it was too late.

Nuder served in the Riksdag from 1994 until February 2009, when he announced he was leaving his seat. He served as the country’s finance minister under former prime minister Göran Persson from 2004 to 2006.

After Mona Sahlin took over as Social Democratic party leader in early 2007, Nuder was eventually forced out as the party’s economic policy spokesperson in January 2008.

Analysts said Nuder’s fall was primarily due to his close ties to Persson, with some wondering why Sahlin waited so long to replace her predecessor’s right-hand-man.