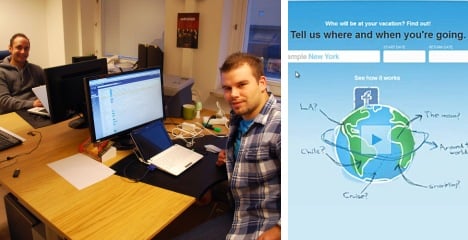 In 2009, American Peter Sullivan left San Francisco with the goal of receiving a tuition-free masters degree from Stockholm University. Little did he know he would have to close his books to pursue what could be the next big thing in travel social media: Vacation Relation.

The rain is falling outside but the young entrepreneurs are smiling, and no wonder; business has been good lately– so good in fact that the two students have decided to take a break from their text books.

“We have to focus a hundred percent on the site now. Things have happened very quickly,” says Sullivan, confirming that a new business wasn’t what he expected from life in Sweden.

“I only came here with the purpose to study and explore Europe.”

However, destiny had something else in store for Sullivan and upon meeting Los at university, he couldn’t help but share a business idea he had had for some time; to build a social network for people about to go on holiday.

“I knew right away that David was an entrepreneur, so I told him about my vision and since then we have been working on Vacation Relation non-stop.”

The thought of a social media travelling site sprung to mind when Sullivan was travelling back in the US.

“I had met some wonderful people on my vacation but it bothered me that I hadn’t met them straight away, right at the beginning of the trip. So, I got thinking,” Sullivan explains.

“And as I continued to travel with friends, my girlfriend and by myself, I realised what a big need there was for a social media travelling platform.”

Unlike other travel communities, Vacation Relation utilises Facebook and LinkedIn to find connections outside people’s normal social circles, but that are going to the same destination at the same time.

“Basically, what we do is introducing new and exciting people that will also be at your vacation. Through this you can find people with similar interests to yourself,” says Sullivan.

Once users have registered their details, they are invited to an event on Facebook that’s shared with fellow travellers and from there, they’re able to arrange meet ups.

While working on their site, Sullivan and Los have been awarded innovation grants and were invited to travel to Arizona in order to participate in PhoCusWright Travel Innovation Summit where a number of online heavyweights, including Google, were in attendance.

“We have had people show interest in our business from all over the world,” Sullivan reveals, but adds that the site was only able to launch thanks to investment from a Swedish professional poker player and financial support provided by a Swedish government organisation.

“It can be hard in Sweden to get an innovation loan, doing what we are doing, but we were lucky. They play it pretty safe over here, no one wants to be the first to invest, but once you’ve raised capital, people jump on the wagon,” says Sullivan.

Sullivan is also grateful for the support he and his partner have received from Stockholm University.

“We have had some great mentors that have believed in our idea and helped us to develop it. SU has a common workspace where startups can get advice, which is really cool,” he explains

Speaking with the technology news website TechCrunch in conjunction with the site’s launch in December 2010, Sullivan jokingly said that he came to Sweden in part for “hot women on bicycles”, he has since come to realise the business benefits of being an American entrepreneur in Sweden.

“Sweden is a very tech-savvy place. This is where Spotify and Skype started and look where they are now,” he says.

“At the same time it’s easier to stand out here than back in the Silicon Valley where everyone is fighting for the same things.”

Vacation Relation has had 3,000 trips uploaded since its launch and Sullivan and Los expect the number to keep growing, with more parties getting involved from all over the world. Currently they are doing a campaign with Swedish charter company Solresor.

“Solresor really like what we are doing and we believe that we will have reached 5,000 trips by the end of this month,” says Sullivan.

“Our plan is to influence the social travel market in a way from which the entire travel industry will benefit.”