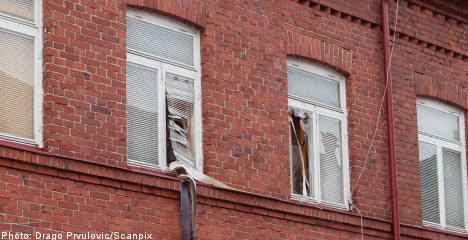 Two men who were in the apartment at the time of the blast were uninjured, despite extensive damage to the floor, walls, and furniture.

As of 6am Wednesday morning it remained unclear what exactly had been thrown into the apartment in the Kirseberg neighbourhood and caused the powerful explosion.

Marie Keismar, duty officer with the Skåne police, was unable to confirm media reports that the blast had been caused by a hand grenade.

Citing investigation confidentiality she also wouldn’t comment on which man police believe was the target of the attack.

The explosive device was thrown through the window of the second floor apartment. Neighbours were evacuated after the blast and the apartment was blocked off by police.

Forensic investigators were working throughout the morning to find clues. At the same time, the hunt for possible suspects is well underway.

Keismar emphasised that the police were devoting all available resources to secure evidence and other clues which could lead them to solve the crime.

“But right now we have no suspects,” she said.

She added that the police take the incident very seriously.

“It’s obviously also very unpleasant for those who live in the area when something like this happens,” said Keismar.

Speaking later on Wednesday morning, police spokesperson Bo Lundqvist told TT that neither of the two men in the apartment at the time of the blast wanted to cooperate in the investigation or be interviewed about what happened.

“One of the men is well-known to the police, the other doesn’t have a record whatsoever,” he said.

No one has yet to be arrested in connection with the attack.