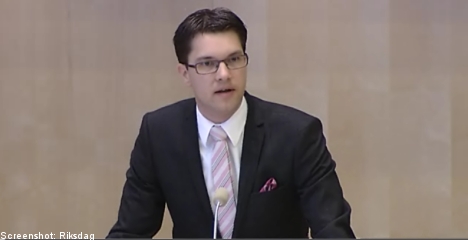 Åkesson argued that the attack in Stockholm wasn’t a one-off event, pointing to the Swedes suspected of planning a terror attack on a Danish newspaper, as well as two Swedes of Somali descent who were convicted in Gothenburg of planning terror crimes.

According to Åkesson, the debate in Sweden about Islamic extremism has been infected by a fear of saying the wrong things.

“One has to be able to discuss rather than simply cast blame on one another,” he said.

Justice minister Beatrice Ask countered by warning that people shouldn’t draw too many conclusions from the Stockholm suicide bombing.

She argued that Sweden is a tolerant country where people accept one another despite their differences.

“Sweden is an open society where people can have different backgrounds and religious convictions and live side by side,” she said.

She admitted, however, that not everyone is accepting of Swedish society.

“There are people who refuse to accept the foundations of our society and who are ready to hurt others to have their way,” she said.

She added that the government was currently reviewing its strategy for how best to prevent extremism from taking root in Sweden.

“I believe, personally, that a lack of hope and belief in the future, due to actual or perceived injustices, is primarily what attracts certain men to extremist movements (Swedish security service) Säpo has said that early measures must be implemented to stop social exclusion,” said Ask.

Åkesson responded by pointing out that Sweden still lacked a national action plan for fighting terrorism, arguing for laws that prohibited people from traveling abroad to participate in terrorist training camps.

“We can say that today we don’t have the tools,” he said.

He also called for a closer examination of young people’s attitudes toward Islamism, arguing that Islamism as a political ideology must be surveyed and combated.

Sven-Erik Österberg, the head of the Social Democrats’ parliamentary group, said his party wants to cooperate broadly with Muslims in Sweden and that there is a problem with “Muslim extremism” in Sweden today.

“The problem shouldn’t be overstated, but it shouldn’t be ignored either. Those who take up the fight against extremism need our support against all forms of extremism,” he said.

Österberg also argued that the government ought to implement tighter controls over publicly financed and privately operated religious free schools.

The Green Party’s Maria Ferm warned against increased control and surveillance in society.

“If we give up a little of our freedom for a little more security, we risk losing both,” she said.

“Jimmie Åkesson tries to connect the typical image of a terrorist to a Muslim man,” she said.

She then cited statistics that only 0.34 percent of European terror attacks are carried out by Islamic extremists and that left-wing and right-wing extremists are responsible for the lion’s share of political violence in Sweden.

Johan Pehrsson of the Liberal Party (Folkpartiet) argued that there was an “uncomfortably high level of extremist violence in Sweden, not only among groups on the extreme right and left.”

“There is burning, bombing, assault, threat and sabotage,” he said, arguing for better measures for helping young people who want to leave extremist groups.

The Left Party’s Lena Olsson criticised the Sweden Democrats’ approach to the debate.

“Listening to the Sweden Democrats and their xenophobic solutions is like listening to a guitar with only one string,” she said.

Taking the podium once again, Ask claimed that Sweden does have an action plan against terrorism and chastised Åkesson for his party’s refusal to participate in discussions about fighting terrorism in the Riksdag’s Committee on the European Union.

“Don’t come and say that you care about fighting extremism when you don’t understand that that work must be carried out within the framework of the EU,” said Ask.

“It doesn’t work to just say no if at the same time you want to uphold freedom and democracy in Sweden.”

Åkesson went on to question how prepared Säpo was for combating terrorism.

“I question whether Säpo has everything under control. It doesn’t inspire confidence that they didn’t know about the suicide bomber in Stockholm,” he said.

He also rejected arguments in favour of fighting extremism by creating a more unified and equal society, as well as claims that most terror attacks in Europe have not been carried out by Islamic extremists.

“You can’t compare militant vegetarians from Umeå with jihadists,” he said.