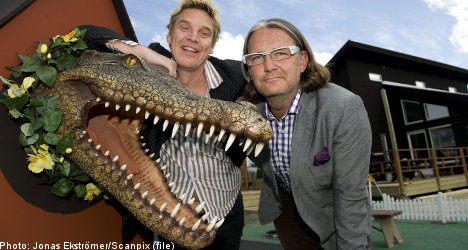 Their new show, Home Takeover with Simon & Tomas, will premiere on March 28th on OWN, which replaced the Discovery Health Channel on January 1st. The network will initially air six one-hour episodes in which the pair transform décor-challenged homes into stylish abodes.

“Simon and Tomas will take America by storm with their unique sense of style. The duo are not only skilled interior decorators, but their over-the-top personalities also make them fun to watch as they perform their design magic and literally move into the homes they are helping,” Lisa Erspamer, chief creative officer of OWN, wrote in a statement on Tuesday.

This is the couple’s foray into the US. In each episode, neighbours and loved ones nominate out-of-date or over-adorned homes for a makeover.

The “Lords of Fabulousness” kick out the unsuspecting homeowners and move in, sleeping in their beds, eating their food and playing their board games.

At the same time, they transform the home’s offending rooms with the help of a team of contractors and a new design plan. The duo also begs and bickers with reluctant homeowners, intolerant builders and each other throughout each episode.