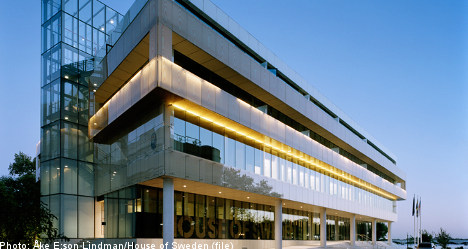 The Embassy of Sweden in Washington, DC (shown here) will not be closed

Sweden’s foreign minister, Carl Bildt, has a list of prospective closures if further cuts become necessary after Sweden’s parliament, the Riksdag, slashed the operating budget of the Government Offices in December, according to a report by Sveriges Radio’s Ekot news programme.

“These are simply media reports and we have no comment to make,” said foreign ministry spokesperson Anders Jörle to The Local on Thursday.

The list is reported to include the Swedish missions in Guatemala, Jordan, Cyprus and Uganda, with the consulate general in Hong Kong also in danger of closure.

“We have no comment to make on that,” Jörle told The Local.

The report follows the announcement on December 22nd that Sweden is to close its embassies in Buenos Aires, Brussels, Hanoi, Kuala Lumpur and Luanda, following the budget cuts.

On December 9th, the Riksdag passed a bill requiring the Government Offices to shave 300 million kronor ($43.64 million) from its operating budget.

The vote marked Prime Minister Fredrik Reinfeldt’s first parliamentary defeat since reelection as the far-right Sweden Democrats and centre-left opposition voted in favour of the cuts.

Previously, the foreign ministry has named Sweden’s missions in Algiers, Brussels, Buenos Aires, Havana, Hong Kong, Khartoum, Lisbon, Luanda, Pyongyang and Rabat as being in danger of closure as a result of the budget cuts.