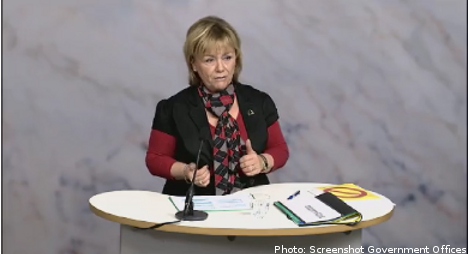 The maximum penalty for buying sexual services will increase on July 1st if the government has its way. The government has now proposed making it possible for the courts to impose sentences of up to one year in prison.

“After reviewing the first year of the law against buying sex, we found that almost all the sanctions, in 85 percent of cases, resulted in each offender having been fined 50 days’ pay,” Ask said at a press briefing on Thursday morning.

“Only a few cases have taken into account aggravating circumstances before the sanction is imposed. This is a concern because in many cases, there are reasons to look more seriously into the crime of buying sex,” she added.

The basis for the proposal is a study that found that the criminalisation of buying sex helped to combat prostitution and trafficking, with the ban argued to have had a deterrent effect, according to a report in the Svenska Dagbladet daily.

“In many cases, there could be a penalty value for fines that can be higher than the maximum penalty for the crime of buying sex,” said Ask.

“Like if buying sex had similarities with sex crimes like sexual assault and when there is an element of degradation in buying sex. The penalty scale is not sufficient and there is a need for a more nuanced assessment of the penalty value,” she explained.

The government currently seeks to raise the maximum penalty for buying sex from the current six months in prison to one year as of July 1st.

Petra Östergren is a writer and social commentator who specialises in gender politics and prostitution issues. She is currently writing a report criticising the law with Swedish historian Susanne Dodillet that will be published in early March.

An outspoken critic of Sweden’s commercial sex laws, her views are at odds with other feminists.

“I just find it really curious what is happening right now,” Östergren told The Local on Thursday.