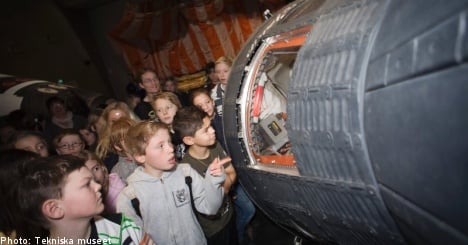 The show premiered at Stockholm’s Technical Museum (Tekniska museet) where it will stay until November before moving on to still undetermined European destinations and then on to the United States.

“We felt it was wise to launch here. There is not (often) this kind of exhibit in Europe,” Don Bies, the curator and designer of “NASA — a human adventure,” said, explaining all the material came from diverse private collections in the United States.

Among these, a two-tonne engine, a parachute that was used in the return to earth of the Apollo 17 mission, rocket replicas, shuttle models and a docking device that actually helped men land on the moon.

“It’s my favourite, it’s so complex, it’s almost like a sculpture,” Bies, wearing a NASA-logo baseball cap, said of the device.

“I am always fascinated by how complex some pieces are, and they were made long before computers.”

The exhibit explores such technical and scientific marvels of space travel, but also concentrates on the historical and human aspect of space missions, presenting a slew of space suits, space food rations, and other items of the day-to-day life of astronauts.

“Not only did they have to figure out how to get them into space, they also had to figure out how to feed them, remove their waste, have enough electricity for the whole trip…” the space enthusiast told AFP, standing in front of a glass case that included a Russian space programme vodka ration, packed in an airtight plastic bag, from the 1970s.

Ann Follin, the museum’s director, said she expected most of children’s questions on astronauts would be “what they did eat, where did they sleep, and how did they go to the bathroom.”

The museum, which already had a certain historical focus, was ideal for the exhibition which also deals with the space race between the United States and the Soviet Union, she said, standing next to a 1960s-looking television set playing late US president John F. Kennedy speaking about space travel.