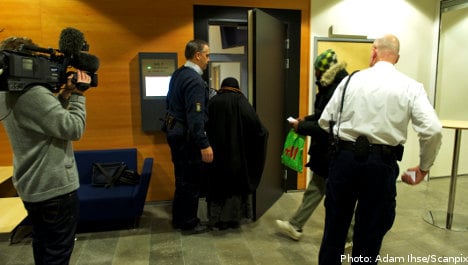 Bille Ilias Mohamed, 26, and Mohamoud Jama, 23, were sentenced to four years in jail in December for “planning terrorist crimes” in Somalia.

The court had said that the two Swedish citizens “had taken it upon themselves, and decided with the Somali Islamist Al-Shabaab militia to commit terrorist crimes in the form of suicide attacks.”

As the pair’s appeal trial opened Friday, Mohamed’s lawyer Thomas Olsson said the case against his client was weak and that he doubted Al-Shabbab could be considered a terrorist organisation according to Sweden’s anti-terror legislation, adding that the militia was a party in an armed conflict abroad.

“The prosecutor’s case was very weak with regards to the allegation my client was preparing a suicide attack,” he said, according to news agency TT.

“It seems doubtful that (Sweden’s) anti-terror legislation can apply to the conflict in Somalia,” he added.

Prosecutor Agnetha Hilding Qvarnström argued her evidence was strong enough, as demonstrated by the lower court’s conviction, and that anti-terror legislation applied in the case.