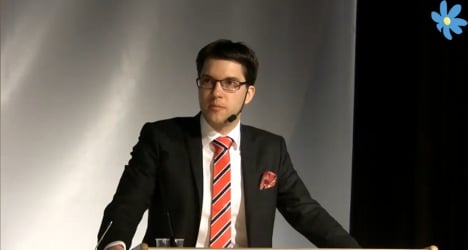 Support for Sweden’s opposition far-right party has grown since its entry into parliament last year while all the members of the governing coalition have seen their ratings drop, a poll showed Monday.

The anti-immigration Sweden Democrats garnered 6.3 percent of voter support in Monday’s poll by daily Dagens Nyheter (DN) and polling institute Synovate, up 1.7 percentage points from the last survey in December.

The party first entered parliament after a September election, obtaining 5.7 percent of the vote and 20 seats, after campaigning against the “dangers of Islamisation” and pledging to safeguard “traditional values”.

Support for the Left Party continued to hover around 5 percent, with the party registering a 0.2 percent rise in the polls since Decmber, bringing the party’s rating to 5.2 percent.

The poll, which is based on responses to 2,673 telephone interviews carried out from January 10th to 26th, also found that 13.8 percent of Swedish voters remain undecided.