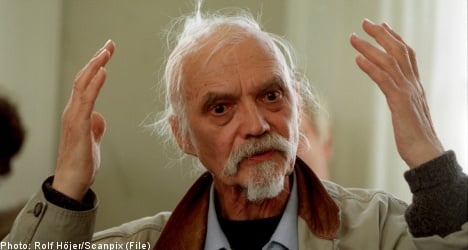 According to the head of the investigation at Lidköping police, it has not been possible to establish a cause of the fire as the house was completely destroyed by flames on the evening of December 30th.

Oscarsson, 83, and his wife Kia Östling, 67, were both believed to have been home when their isolated home near Skara in western Sweden burned to the ground.

Due to the heat, police technicians had to wait several days to begin sifting through the ashes in search of the couple. At around noon on Sunday January 2nd, they discovered the remains of one person.

Per Oscarsson is a beloved actor in Sweden and has appeared in theatre, film, television and popular children’s works.

He won the best actor prize at the 1966 Cannes Film Festival for his role as Pontus in Danish director Henning Carlsen’s “Hunger” (Sult), an adaptation of Norwegian Nobel Literature winner Knut Hamsun’s novel.

The deaths of Oscarsson and his wife echo the circumstances surrounding the accident that claimed the life of acclaimed Swedish jazz singer Monica Zetterlund several years earlier.

Zetterlund, who had retired from performing in 1999 due to her severe scoliosis, died in an accidental fire in her Stockholm apartment in May 2005.