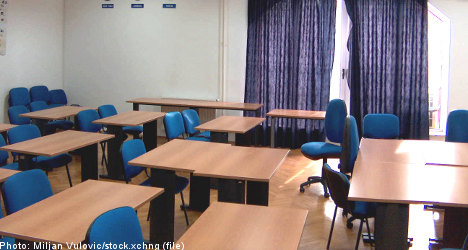 All 30 municipalities that were reviewed were criticised for serious shortcomings and lacking a legal basis and the Swedish Schools Inspectorate (Skolinspektionen) is now demanding that municipalities complete or conduct new inquiries.

“It is shocking that the investigations have revealed such low quality,” the agency’s director-general Ann-Marie Begler wrote in the Dagens Nyheter (DN) daily on Monday.

The agency’s investigation shows that many students are placed into these schools on dubious grounds and indicates that pupils with a foreign background are over-represented among pupils in currently attending special schools, with the proportion increasing over the last 15 years from 1 percent to 1.4 percent.

There are currently about 12,000 pupils in these schools.

The reason for this should be investigated further, according to the agency, which fears that the municipalities, with their inadequate investigation methods, may have misread the problems that newly arrived students may have at school.

The municipalities have not yet found a way to properly investigate and make decisions about special schools that complies with the law. It is serious and damages the rule of law for both students and parents, according to the agency, which believes that municipalities appear to take their tasks too lightly.

It now proposes that the county councils conduct the psychological and medical investigations instead of the municipalities.

Begler refused to speculate on the number of children who have been wrongly sent to special schools.

“It is not because all parents who currently have children enrolled in special schools are now going to be terribly worried that they have been incorrectly enrolled, but because one must ensure that these children are properly examined and that they get the proper schooling that they are entitled to have,” she said.

She added that parents who are concerned about their child’s placement can have their children reassessed.

There will soon be an additional investigation on special school placements in other randomly selected municipalities.

The Swedish Association of Local Authorities and Regions (Sveriges Kommuner och Landsting, SKL) is concerned about the results of the investigation.

“The municipalities’ aim is to handle the decision in the best possible manner and the decisions that were criticised for faulty grounds will be investigated again,” SKL wrote in a statement on Monday.

The shortcomings of the assessment are a breach of the UN’s Convention on the Rights of the Child, according to children’s rights organisation Save the Children.

In Article 3 of the convention, it states that the child’s best interests always come first, which the investigation has now shown that Sweden does not live up to.

According to Save the Children, these are a type of abuse that the UN’s Committee on the Rights of the Child will highlight in their observations of how Sweden lives up to its intentions.