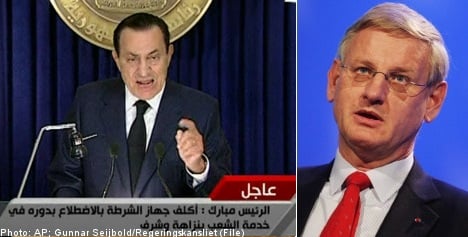 Bildt said he “welcomed” a Tuesday night announcement by Egyptian president Hosni Mubarak that he would not stand for re-election in Egypt’s elections, scheduled to take place in September.

“The Mubarak era in Egyptian politics is over,” he wrote.

“I now hope that real transition to a democratic, pluralistic, and stable Egypt can begin.”

Bildt has been in Brussels since Monday, where developments in Egypt have dominated meetings with EU foreign ministers and Swedish EU representatives.

Earlier in the week, Bildt explained that the EU is united in its belief that the only way to achieve a democratic and stable Egypt is through free and fair elections.

He cautioned, however, that the European Union has no views as to what the results of such elections should be.

300 people dead and more than 3,000 injured, millions of Egyptians took to the streets in protest on Tuesday calling on Mubarak to step down.

In a statement broadcast on television on Tuesday night, Mubarak, 82, said he would not stand for reelection, signaling the end of his three decades at the top of Egyptian politics.

While Bildt was encouraged by Mubarak’s announcement, Egyptians in Sweden who support calls for his ouster remained skeptical of the Egyptian president’s stated intention to get out of politics.

Saad has been active in organising demonstrations in Sweden to show support for protestors in her home country.

She claimed Mubarak has a history of hiding the truth from the Egyptian people and she saw no reason to think he would stop now.

“We demand that he step down immediately,” she said.

Saad fears that Mubarak will still be able to influence the September elections even if he’s not a candidate, either through having his son run for president or through rules that allow him and his allies to supervise the election.

“If the election is held under Mubarak’s supervision, we won’t be able to trust it at all,” she said.

In addition to Mubarak’s immediate departure, Saad and her fellow demonstrators have called for Egypt’s constitution to be changed to ensure independent electoral supervision and to remove restrictions on who can run for president, changes which Sweden’s foreign minister also supported.

“Now the crucial task is to arrange the free and fair election of Egypt’s next president and to create credibility for political developments until then,” said Bildt.

“But that is going to require major changes in current regulations to open things up for all candidates who wish to run. The old regime’s limitations must be abolished.”

“The Egyptian people’s ability to choose freely must not be restricted,” he added.

Saad and other Egyptians in Sweden are planning another demonstration to be held in central Stockholm on Saturday in which they will stage a mock trial of Mubarak.

“We want to let the world know what he has done,” she said.

Weary travelers who arrived back in Sweden on Tuesday night were relieved to be home, and voiced doubts over whether they would return to Egypt in the future.

“No more Egypt. You just want to get home because you’re worried and have this in the back of your mind the whole time,” Ann Kristin Jedler from Motola in central Sweden told the TT news agency.

Charter companies told TT they expect to have all their customers currently in Egypt back in Sweden by the end of the week.