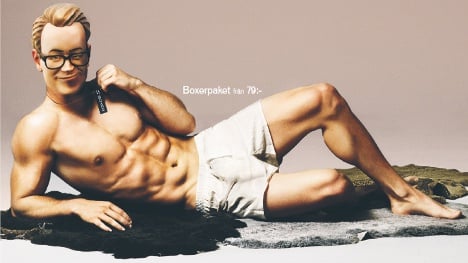 “The man is presented through his posture and lack of clothing as a mere sex object in a way that could be deemed offensive to men in general,” the ombudsman wrote in a statement.

The advert, which shows the computer-generated image of Robert lying seductively on sheep skins clad only in cotton boxer shorts with an outline of his oversized sex organ clearly defined, was reported to the ombudsman by a individual.

In the report to the ombudsman the complainant argued that the “focus on the organ and its size had nothing to do with the product and even if that was the case, is no way to portray either a man or a woman”.

The complaint also detailed the pressure that such a portrayal could impose on the advert’s male audience.

“The figure’s excessively muscular body and the large organ is a stereotype and an unrealistic depiction of a man which creates pressure for both younger and elder men.”

Boxer TV-Access AB meanwhile responded that the advert, which offers a package of channels for 79 kronor ($12), was designed for an advertising competition.

The competition, Boxer cited in its defence, encouraged submitting companies to “stretch their advertising concepts to give extra clarity in illustrating the medium’s visual language”.

Boxer also argued that its animated caricature Robert is a well-known character having featured in the firm’s advertising for over ten years and whose personality could be best described as “disarmingly sympathetic, almost overly courteous, and in some sense a pastiche of a ‘geek'”.

But despite Boxer’s insistence of the innocence of its “folksy” virtual spokesperson, the ombudsman reached the conclusion that the advert could be considered sexist and as such was in breach of Article 4 of the International Chamber of Commerce (ICC) Consolidated Code of Advertising and Marketing Communication.