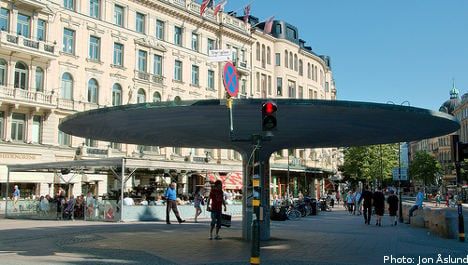 “This customer behavior would have been unthinkable in many other different purchasing situations. Previous research indicates that only a lack of competition or a low price can get customers to return despite being badly treated,” said Kristian von Seth who, together with Nicole Rosvall, has investigated the topic in a masters thesis presented at Stockholm University this week.

The study, entitled “Same music, same drinks, same poor service” (“Samma musik, samma drinkar, samma dåliga service”) argues that the Stureplan set puts up with the churlish reception at some of Stockholm’s more expensive watering holes, due to a mix of sexual attraction and a yearning for confirmation.

“The motivation is based on, among other things, sexual attraction, other people at the nightclub, self-identity of customers, seeking confirmation and the pure physical attributes of nightclubs,” said Nicole Rosvall.

The study, within the field of business economics, is based on qualitative interviews conducted with regular customers at Stureplan nightclubs with a theoretical basis in service marketing and psychology.

The authors argue that contrary to established theory the poor service and unrefined staff form one of eight identified attributes explaining why many of the nightspots are so popular and successful.

The long queues and poor reception renders the chosen few to feel exclusive and the experience of VIP guests is heightened by virtue of the knowledge of how the less fortunate are routinely treated, the study argues.

“The underlying problem, in this case the bad service, is thus a part of the reason why customers at Stureplan nightclubs feel an attraction to their favorite nightclub,” said Kristian von Seth.

The study by Kristian von Seth and Nicole Rosvall has been submitted as a master thesis at Stockholm University within the field of business economics with a focus on marketing.