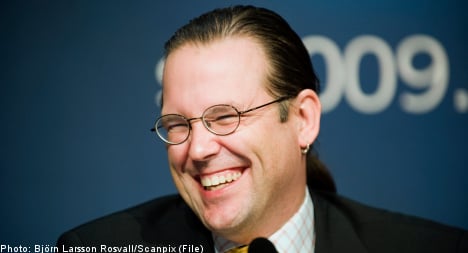 Currently Sweden, along with Malta, has the EU’s most rapidly falling unemployment rate.

Speaking with Sveriges Radio (SR) on Wednesday, Borg painted a very optimistic vision of the future, promising that Sweden’s jobless rate will drop from the current rate of 7.8 percent to 5 percent by 2014.

“If a new crisis does not occur, there should be conditions to come down to 5 percent or so towards the end of the government’s current term in office. We will belong to the European elite in terms of unemployment,” he said.

And while the Swedish National Institute of Economic Research (Konjunkturinstitutet, KI) is skeptical about the forecast, the organisation’s head stopped short of dismissing the bold prediction entirely.

“If we have a strong boom in 2014, then we may also have a forecast of 5 percent. However, we usually cannot predict booms and recessions so far in the future. So when we conduct longer assessments, they often include on rather normalised economic conditions in them,” KI director general Mats Dillén told the TT news agency.

When asked how Borg can look so far into the future if KI could not, Dillén answered, “I do not know. But he is good.”

KI’s assessment, which Dillén emphasised is very uncertain, is that Sweden’s equilibrium unemployment rate will be around 6.5 percent.

“But it is based on currently known rules and I do not know what the finance minister has thought up, if he has further measures in mind to bring down unemployment,” added Dillén.

He also pointed out that a 5 percent unemployment forecast for 2014 is based on a very favourable state of the market or steps that Borg has in mind to push back unemployment.

According to Dillén, an important factor is the result of wage negotiations that begin in the autumn and continue in 2012.

“One could very well say that we will come down to low equilibrium unemployment such as 5 percent assuming collective bargaining turns out very well,” he said.

PARTNER CONTENT
Where are you going this summer? Why Malta is the perfect Mediterranean escape