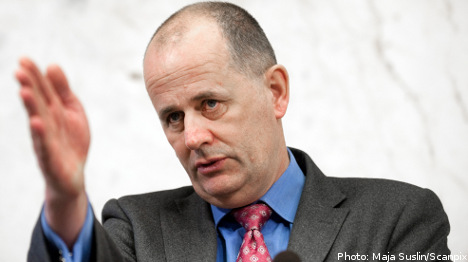 “The earnings from the sale amounting to 19 billion kronor will be used to reduce the public deficit and thereby strengthen the Swedish economy,” Financial Markets Minister Peter Norman said in a statement.

He added the amount represented about 2.0 percent of Sweden’s public debt.

The centre-right coalition government announced late Thursday it would sell up to 255 million shares in Nordea, the largest bank in Sweden and the Nordic region with some 11 million clients.

The announcement was in line with the government’s stated plan to gradually sell-off parts or all of several state-held companies.

The state holdings in Nordea stem from Sweden’s deep banking crisis in the early 1990s, when the initially fully state-owned bank was created through the merger of the viable parts of several smaller struggling banks.

Today, Nordea’s largest shareholder is Finnish insurance company Sampo with some 20 percent of the stock.

“The state-owned businesses are important for Sweden and the state shall continue to own companies that have a particular importance to society. In other cases, it is the state’s task to set the framework and rules for the business sector — not to own and run companies,” Norman said.

When Swedish Prime Minister Fredrik Reinfeldt’s coalition first came to power in 2006, it received parliamentary backing for its plans to sell-off state-owned companies.

Before winning re-election last September, the government reiterated its intention to let go of some or all of TeliaSonera, Nordea and mortgage lender SBAB.

It has said energy company Vattenfall and its share of Scandinavian airline SAS could also soon go on the block.

The far-right and left wing opposition parties have said they plan to block some of the minority government’s sell-off plans, but Nordea was not one of the companies they wanted the state to hold on to.

Sweden has already sold Absolut Vodka maker Vin & Sprit, a chunk of telecoms giant TeliaSonera, its share in the Nordic and Baltic stock exchange operator OMX and part of the postal service, among others.