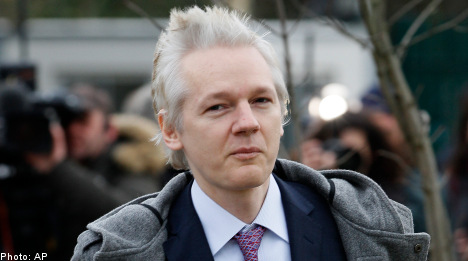 The 39-year-old Australian appeared at Belmarsh Magistrates’ Court in southeast London at the start of a two-day hearing.

Swedish prosecutors want to question the whistleblowing website’s chief over allegations of sexual assault and rape made by two women, but Assange claims the moves are politically motivated.

His lawyer Geoffrey Robertson said in his opening arguments that a rape trial in Sweden would violate Assange’s human rights.

“He would be tried behind closed doors in a flagrant denial of justice,” he told a packed courtroom at Britain’s highest-security court complex.

Assange’s lawyers were also expected to argue that the extradition request is unacceptable because he has not been charged with any crime.

Wearing a dark blue suit and tie, the former computer hacker spoke only to confirm his name and date of birth as proceedings began.

A decision is not expected Tuesday, with the judge expected to defer until later this month.

If the ruling goes against Assange he will be able to appeal all the way to England’s supreme court.

At the end of the first day’s evidence, Assange claimed that a “black box” of accusations against him was being opened to inspection.

“On the outside of that black box has been written the word ‘rape’. That box is now, thanks to an open court process, being opened,” he told reporters.

“I hope over the next day we will see that that box is in fact empty and has nothing to do with the words that are on the outside of it.”

Swedish prosecutors want to question Assange over allegations of sexual assault and rape made by two women.

Assange, who won worldwide notoriety for his website’s release of thousands of secret US diplomatic cables, insists the attempts to extradite him are politically motivated.

His lawyers were to argue that if Assange were extradited to Sweden, he would risk extradition or could even be passed on to the United States where they say he could face the death penalty.

Assange, who was arrested in London in December 7, now faces a widening criminal probe in the United States and has made powerful enemies in Washington.

Robertson claimed that any trial in Sweden would be held “in secret” and that he would be held “without bail in conditions that have been condemned by the European Commission”.

He also argued that the rape charge would not count as rape under European law.

“The court cannot accept the charge of rape is correctly identified, that that box has been ticked, because what is rape in Swedish law does not amount to rape in any other country,” he said.

“The prosecutor describes this charge as ‘minor rape’. That is a contradiction in terms, rape is not a minor offence.”

The three molestation charges relating to Assange’s other accuser were also “plainly wrong” because the woman had consented to sex, he told the court.

But Clare Montgomery, representing the Swedish authorities, said the arrest warrant alleges that Assange had sexual intercourse with one of the women “improperly exploiting the fact that she was asleep; and that Assange was aware it was the express wish that a condom be used.”

Talk of extradition to the United States “depends on a factual hypothesis that has not yet been established as being real”, Montgomery said.

Called as a defence witness, a retired former Swedish appeals court judge said the case had been “from the beginning extremely peculiar”.

Brita Sundberg-Weitman said Swedish prosecutor Marianne Ny, who is handling the allegations, had a “rather biased view against men”.

“I honestly can’t understand her attitude (towards the Assange case). It looks malicious,” she said.

Sundberg-Weitman answered “yes” when asked by Robertson if it was her view that Ny wanted “to get (Assange) into her clutches and then arrest him no matter what?”

The former computer hacker’s legal team were to take the rare step of publishing their defence argument in full online later Monday.

One of his lawyers, Mark Stephens, told The Daily Telegraph newspaper: “You will see some fundamental challenges to the European arrest warrant scheme.”

Assange was released on bail a week after his arrest and has since been staying at a supporter’s country mansion, under strict conditions including that he obey a curfew, wear an electronic ankle tag and report to police daily.

Leaked details have cast new light on the rape and molestation accusations he faces after Swedish police reports filled with graphic details of the allegations reached the Internet last week.

The police documents, viewed by AFP, contain a statement from the alleged rape victim alleging that Assange forced himself on her, without wearing a condom, while she was asleep.

The woman, identified only as Miss W, said she had had consensual sex with Assange earlier in the evening and had then fallen asleep with him, only “to wake up because he has forced himself inside of her,” the report said.

“‘She asked immediately: are you wearing anything?’ and he answered ‘you’,” it added.

“She told him ‘You better not have HIV,’ and he answered ‘Of course not’.”

After that, Miss W allowed the intercourse to continue.

The documents also include a forensic report on the condom used during a sexual encounter with Assange’s other alleged victim, Miss A, who accused him of having deliberately broken the prophylactic.

The report says the condom had not been cut with scissors or a knife.

Celebrity backers including socialite Jemima Khan were planning to lead rallies in London for Assange during his extradition hearing.

Khan, the wealthy former wife of Pakistan cricketer Imran Khan, was in court for the start of the hearing.

After releasing hundreds of thousands of confidential US documents about the wars in Iraq and Afghanistan last year, WikiLeaks has in recent months been slowly publishing more than 250,000 leaked US diplomatic cables.