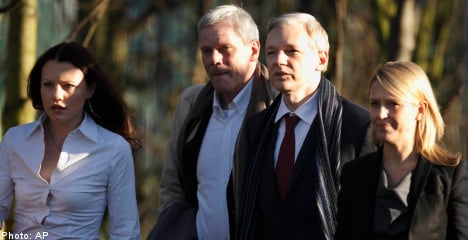 Assange was back in Britain’s highest-security court for the final day of a two-day hearing to decide whether the former computer hacker can be extradited.

Sven-Erik Alhem, a former Swedish prosecutor and now a legal commentator who appeared as a witness for Assange, said Ny could have questioned Assange via videolink from Britain and there was no need to extradite him for interview.

“I don’t really understand why you could not hear Julian Assange here in his country, if the British authorities allowed such a hearing to take place,” he told Belmarsh Magistrates’ Court in southeast London through an interpreter.

In the legal papers quoted by lawyers for the Swedish authorities, Ny said she made repeated attempts in September and October to contact Assange by phone and text message to set up an interview in Sweden but had no success.

She was quoted as saying that Assange’s Swedish lawyer offered a telephone interview but Ny declined and warned him that she was going to issue a warrant.

“It must have been crystal clear to Julian Assange since the arrest warrant of September 27th that we were extremely anxious to interview him,” Ny said, according to evidence.

Assange arrived at the court wearing a blue suit, white shirt and a red tie and waved cheerily to supporters in the public gallery as he made his way to the dock.

The 39-year-old Australian’s defence team spent Monday’s first day arguing that Assange would face a “flagrant denial of justice” if extradited over allegations of rape and molestation.

The judge is expected to defer his ruling in the extradition case until later this month. If the decision goes against Assange, he will be able to appeal all the way to England’s supreme court.

Julian Assange was arrested in London on December 7th. He was released on bail a week after his arrest and has been staying at a supporter’s country mansion under strict conditions.