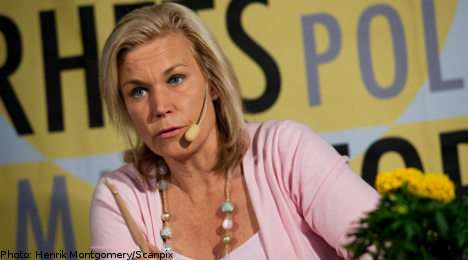 Having taken note of the events in Tunisia and Egypt in the last month, she wants to further invest in achieving these aims, newspaper Dagens Nyheter (DN) reported on Thursday.

Carlsson calls internet activists the “new democracy fighters.” She will host a meeting on March 10th to hear about new project ideas and has invited individuals to submit their ideas by email by February 24th at [email protected].

“It is about supporting people’s efforts to build democracy from the inside in unfree countries. I will take the best ideas from the meeting in March with me to work for developing Swedish aid for democracy, as well as in the discussions taking place within the EU,” Carlsson said in a statement on Thursday.

“The knowledge and the commitment of internet activists, entrepreneurs and bloggers are needed in modern aid that takes freedom seriously,” she added.

Carlsson will invite a number of high-profile experts to contribute to the conversation. The invitation list will be made up of individuals with ideas about social media on their websites and the 10 most creative will be chosen, according to DN.

Among the most eagerly anticipated invitees is Swedish live video streaming site Bambuser’s founder Måns Adler. The site was among those blocked in Egypt two weeks ago. Last Wednesday, it created a new site dedicated to videos from Egypt after access to Bambuser from the country was restored.

Swedish aid allocation for democracy and freedom of speech began in 2009 at a significantly smaller scale.