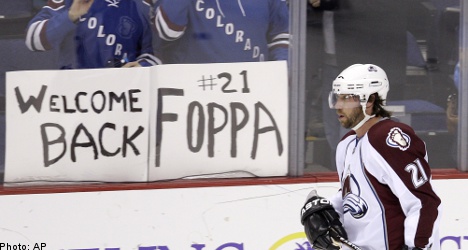 Forsberg, 37, admitted it felt a bit different on the ice now after a three-year absence from the league.

“It’s tough for me to beat guys one on one. I felt maybe a little slower in the beginning,” he said.

Forsberg was put on the same line with center Matt Duchene and right wing Milan Hejduk.

He wore his familiar number 21 Avalanche sweater, finishing with one shot, two hits and a minus-2 in 22 shifts totaling 17:38 of ice time.

“It was nice to see him back,” Hejduk said. “He hadn’t played for a while. He was strong on the puck. He did things that he did all along and he did them again.”

However, Forsberg wasn’t happy with himself or the defeat.

“I’m playing with two good players. Maybe I should just give the puck to them instead of me having it. Hopefully we learned from each other from this game, and go from there. And win a game — that’s what we have to do,” he said.

Colorado have lost six in a row and are in danger of falling out of the race for a Western Conference playoff berth.

“He was arguably our best player tonight. He kept his shifts short. He had good energy for the most part and was playing well. So I think it’s a real good step for Peter, certainly in the right direction,” coach Joe Sacco said of Forsberg.

Forsberg hadn’t played in the NHL since 2007-08, when a right foot injury interrupted his stellar career in North America.

He played last year in the Sweden’s top-flight Elitserien and began practising in January to see if he would be physically able to make a return for Colorado.

“Our line played in their corners most of the game. We battled, we were trying, we were wrestling. We got it out of there a couple of times, but not too many. Just overall, our team, we don’t have too much confidence right now,” Forsberg said.