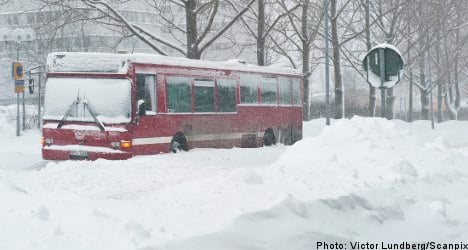 As a result, Storstockholms lokaltrafik (SL) Chairman Christer G. Wennerholm has threatened to fine the operator’s bus contractors, who lost 15 million kronor ($2.31 million) in revenue on Friday due to the cancellations.

“We believe that up to 1 million passengers were affected,” Thomas Silvander of SL’s press office said on Saturday.

The reason behind the cancellation of bus services on Friday remains unclear. Traffic returned to normal on Saturday morning with only minor disruptions.

Social Democrats on Stockholm’s county council have demanded that SL show its agreements with bus contractors.

“I think that it was a very drastic decision to suspend in large part all bus services. It feels like an extreme decision even if it was extreme weather,” Helene Hellmark Knutsson, opposition county council commissioner and second vice chairwoman of SL, said on Saturday.

“Stockholm cannot come grinding to a halt in this way. People cannot go to work and school. In addition, daily life was disrupted to the tune of about a million kronor in lost wages, costs that do not end up in SL’s account,” she added.

According to Wennerholm, SL is considering fines if it determines that contractors did not fulfill their agreements.

“Contractors who made the decision to suspend bus services may have been too cautious in their assessment. It remains to be seen,” he told Svenska Dagbladet (SvD) on Saturday.

According to Silvander, SL will discuss Friday’s bus chaos with all involved parties in the coming week.

“SL will go through this particular day with our contractors, with the road managers and all involved, to look at how we can prevent this from happening again in the future,” he said.

Separately, Sweden’s Infrastructure Minister Catharina Elmsäter-Svärd has come under heavy criticism for the transit disruptions from other members of the ruling Alliance coalition’s parties.

In addition to the bus cancellations, trains were also delayed as a result of the heavy snowfall over large parts of southern Sweden on Friday.

Following the numerous interruptions last winter due to unprecedented snowfall, the smaller parties in the Alliance have demanded more money for Sweden’s infrastructure.

“There must be more money in order to get around,” Centre Party leader Maud Olofsson told newspaper Dagens Industri on Friday.

She called for increased investments in maintenance and the expansion of rail service.

“There was a reason why I wanted a Centre Party member for the infrastructure minister post,” she said.

“It is clear that there must be a thorough increase. It will require major investments in the future,” he said.

Liberal Party economic policy spokesman Carl B. Hamilton agreed and felt that the directors did not do their job.

“If it is true that Sweden has never invested so much in infrastructure as now, but it still does not work, is it not time to replace the heads?” he asked.

However, the amount of resources the government invests does not play a role in the weather, according to Elmsäter-Svärd.

“They could not cope with the weather. We cannot run at full capacity when the weather is so extreme,” she said.