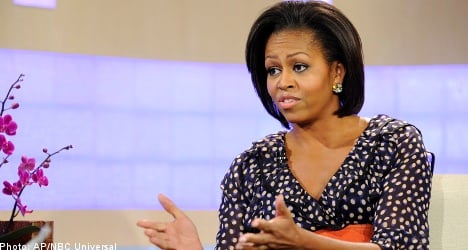 The wife of US President Barack Obama has won praise after departing from her usual upscale designer fashion style by appearing on NBC’s Today show on Wednesday in H&M.

“Very nice and flattering that Michelle Obama, who has such an unfailing sense of style, blends H&M into her closet. We take it as a compliment,” Charlotta Nemlin of H&M’s press section told newspaper Expressen on Friday.

Obama wore a $34.95 (299 kronor in Sweden) navy blue dotted dress on the show. The dress appears on the company’s website as “in stores now,” but it appears that is not the case in a number of US outlets.

According to the Obama fashion blog mrs-o.org on Thursday, stores in both Detroit and Boston were fielding numerous calls looking for the dress even after they had sold out.

Obama’s stylist modified the dress by adding sleeves. In addition, she wore a thicker belt around the waist with the ensemble instead of the red sash that accompanies the dress.

According to Expressen’s fashion expert Emma Danielsson, Obama’s decision to wear a Swedish label is “fantastic publicity” for H&M. Recently, the First Lady has come under fire from the fashion industry for not exclusively wearing American labels and designers.

This is not the first time Obama has stepped out in H&M. While campaigning for her husband’s presidential campaign in 2008, she wore a striped maroon, black and white tank dress, also retailing for $34.95. The outfit reportedly made her appear more accessible to many American women.