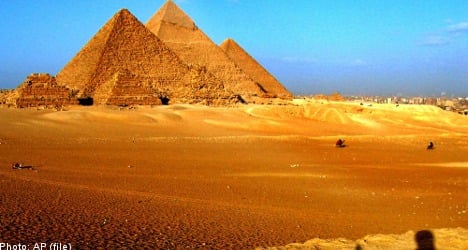 “We have not undertaken any decision yet. The country must become more stable first,” said Anders Jörle of the ministry’s press department.

As Swedish charter travel companies await a change in the ministry’s advisory, Thomson of the UK has already resumed flying tourists to the Red Sea.

Swedes involved in the Egyptian tourism industry have been hard-hit by the warning.

“We had 100 employees, but have now laid off a large portion of the staff,” said Niklas Funk, who runs diving company Colona Divers and has resided in Egypt for many years.

The 60 Egyptians who worked for the company are receiving severance payments until the money runs out.

“Many of them have children and families who need food, so we will try to support them for as long as we can,” said Funk.

He hopes that the situation will stabilise so that the Swedish foreign ministry will lift its advice against travel to the country.

“The tourist industry has basically come to a halt. Within two days, 1 million tourists left the country. The only people left now are the English and the Germans. No one feels that it is in any way unsafe to live there. Everything is as usual, but with a lot fewer people,” said Funk.

However, Sweden’s foreign ministry will continue to keep a eye on the country’s developments before it decides to lift its advisory.

Both Ving and Apollo have provisionally scheduled for departures to resume to Egypt on May 2nd. The companies will likely keep the date in place even if the foreign ministry rescinds its Egypt warning soon.

“It is for the sake of our own planning. We have arranged flights to the Canary Islands instead,” said Kajsa Moström, communications director at Apollo.

Swedish tour operator Fritidsresor will discuss whether and when to resume travel to Egypt this week.

However, Thomson of the UK, which along with Fritidsresor and Star Tour are subsidiaries of German tour operator TUI, has fully resumed operations at all destinations on the Red Sea.