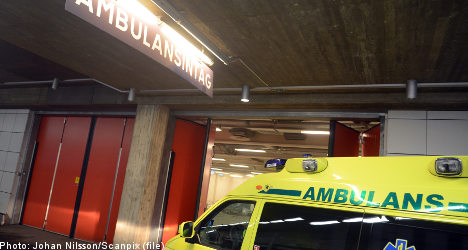 “We have reached an all-time high in the last three weeks because of the weather situation,” said Lennart Adamson, director of operations at Karolinska’s orthopaedics clinic in Solna and Huddinge.

Normally, the orthopaedics clinic performs 10 to 15 emergency operations each day. However, in the last three to four weeks, the clinic has performed three times as many emergency operations. According to Adamsson, about 80 percent of the procedures were caused by slippery conditions.

“These result in large costs to society. There are many young people in these groups, not just the elderly,” he said.

Wrist and ankle injuries are the most common. However, accidents caused by slips and falls also force the postponement of many planned surgeries.

“The large problem in Stockholm in orthopaedics is the severe shortage of emergency hospital beds, to find a bed for the patient,” said Adamsson.

Gothenburg and western Sweden have also received their fair share of slippery conditions and misery in the last two weeks.

“It has been a constant pressure on emergency operations because of the slippery conditions. However, it is quiet today,” said Marianne Thulin of Sahlgrenska’s press office.