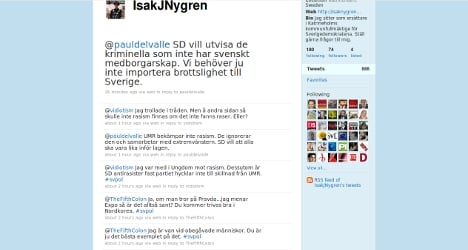 “It would be good for the child if the parents are similar in appearance,” Isak Nygren told Expo magazine on Saturday.

Nygren, who turned 21 on January 17th, had recently stepped in for a departed Sweden Democrat municipal councillor in Katrineholm. He claimed that he often “spiced up” his posts to provoke reactions, but continued to stand behind his views, Expo reported on Saturday.

According to Nygren, “miscegenation” leads to rootlessness, Expressen reported on Saturday.

“When the Sweden Democrats were against [overseas] adoption, it was for the same reasons. There will be identity problems and can result in mental health issues,” he said, according to Expressen.

Sweden Democrat press secretary Eric Myrin said on Saturday that Nygren’s views are contrary to the party’s and can be grounds for expulsion.

Nygren described himself as an “active anti-racist” and Sweden Democrat member “for many years” during the same time on his Twitter feed late on Saturday.

In an October blog post, he described Islam as “a violent pedophile cult.” He also praised the departure of former Egyptian president Hosni Mubarak, but warned of worse to come.

However, Sveriges Radio P4 Sörmland reported in the summer of 2010 that Nygren, then running for the Sweden Democrats in both the municipal and county elections, had been active in a neo-Nazi network, according to Expo.

In 2008, Nygren applied for membership in the neo-Nazi Nordic Alliance (Nordiska förbundet) and started a now-dormant neo-Nazi network, SVT reported on Saturday.

According to Expo, Nygren was also very active in the Nordic Alliance’s online forum until 2008, writing about his extreme right-wing ideologies, denouncing mass immigration and criticising Islam.

When confronted by Expo, Nygren did not deny the postings, but claimed that they had nothing to do with neo-Nazism.