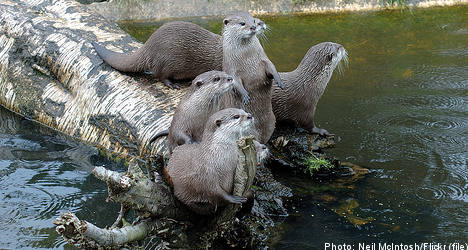 The number of otters in Sweden has been restored in earnest to over 2,000 over since the 1970s, when PCBs were banned in the country, but new toxins may harm the population’s continued growth.

This time around, the otter is in danger of decline through perfluorinated substances, toxic materials that are used in waterproofing and can damage the liver and reproductive system.

“Analyses of 10 different fluorinated substances in otters show a dramatic increase from 1980 to today. The highest levels were extremely high, among the highest in the world,” said Anna Roos, curator of Stockholm’s Swedish Museum of Natural History (Naturhistoriska museet).

She hopes that plans for an EU ban on the environmental toxins will become a reality. In addition, brominated flame retardants have been found in otters, but in relatively low concentrations.

Environmental pollutants are not the only threats against the reserved animal. Many otters are run over in traffic. The Swedish Transport Administration (Trafikverket) has begun to build passages so otters can safely cross busy roads and bridges.