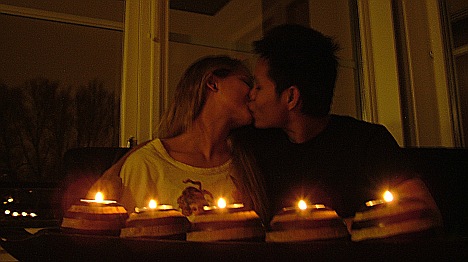 The Viking conquests of yesteryear were often undertaken by the fierce Nordic warriors to “make contact” with new cultures and warmer climes.

And when Alexandra Axelsson, a native of Linköping in central Sweden, set off to Thailand several years ago, her aims were much the same.

Indeed, Swedes are no strangers to adventures abroad, although there are a few differences between how Swedes today and the infamous Vikings behaved in other countries.

And once the Vikings had exhausted themselves, double-checking that all monasteries had been successfully razed to the ground, they would grab the most beautiful women by the hair and drag them back home to spend the winter in the sweaty act of making more Vikings.

Today, however, Swedes have ditched the unkempt beards and longboats in favour of designer sunglasses and budget airlines. In addition, women like Alexandra now make up a significant chunk of the Swedes now seeking love and treasure in other countries.

And apart from brief behavioural relapses on Thai package holidays and the Finland ferry, Swedes today are a lot more refined than their marauding Viking forbearers.

However one thing still remains the same: Swedes are still quite skilled at convincing unsuspecting mates (both male and female) to journey back with them to this cold and dark outpost on the fringes of Europe.

Alexandra is one modern-day Swede who managed to entice her partner to give up the beaches of southeast Asia for the snow-filled streets of Sweden.

And, if recent statistics are any indication, she is not along among the increasing number of Swedes who bring their overseas love conquests back home.

According to recent statistics from the Swedish Migration Board (Migrationsverket), the number of Swedes who have brought a partner back from another country has increased 30 percent in the last four years.

In 2009, more than 22,000 people were granted Swedish residency permits because of “newly-established ties”.

Another study carried out by Thomas Niedomysl at the Institute for Future Studies (Institutet för framtidsstudier) also indicates that ever more people are moving to Sweden for love.

Alexandra met Noi Loungvixa in Thailand in 2008 and the couple lived together there until relocating to Sweden in the summer of 2010.

Now they are looking forward to spending their first Valentine’s Day in their new flat in Linköping where, after the initial culture shock, they have found their feet in the cold new climate.

The shift was hard for Noi at first, as he was unprepared for quite how different Sweden would be.

“I remember seeing old people walking their dogs and thinking, ‘Don’t these people have any family to walk with them?'” he recalls.

Noi is one of an increasing number of non-Swedes who have ended up in the country with a Swedish partner and find themselves struggling to adjust.

He was surprised, for example, at how hard it was to chat to strangers, something that people do naturally in Thailand. And of course nothing could prepare him for the first snowfall.

Increased international travel and the internet have helped many Swedes who live in rural areas marked by shyness and a lack of potential partners to have an easier time finding and choose a mate.

Chat forums and Facebook have led to matches being made that span the globe. Not to mention the pop-up banners that shout ‘MEET SWEDISH GIRLS NOW!’ on select websites.

Generally speaking, Swedes these days try to convince the object of their desire to accompany them to Sweden by pointing to the allure of the healthy lifestyle, the inclusive social system, and the great outdoors.

While foreign women may no longer be dragged back to Sweden by the hair, some men who come here might argue they nevertheless made the journey kicking and screaming.

Interestingly enough, Niedomysl’s research points to some gender-specific trends when it comes to the geographical origin of these so-called marriage migrants which concur with many preconceptions people have about where abroad Swedes find their partners.

“The majority of female marriage partners (in Sweden) come from southeast and other Asia, Eastern Europe, Russia and South America,” he writes.

However, Niedomysl was surprised to find that, while the media focuses on young female migrants from poorer countries marrying Swedish men from rural Sweden, in reality, the largest proportion of marriage migrants in Sweden are males from relatively affluent countries.

While Noi and Alexandra may not adhere to the common view of an international Swedish couple, Alexandra’s story mirrors the arc of the stereotypical Swedish beach bum who travels to Thailand with plans to go backpacking round Asia.

But Alexandra’s plans changed when she met Noi, a successful climbing instructor, originally from Thailand’s lesser visited neighbour Laos. Alexandra and Noi fell in love and enjoyed life together on the tourist island of Phi Phi.

Alexandra visited Noi’s village in Laos, learned to speak Thai and began working as a dive instructor. It was perfect, but perhaps too perfect.

Although she thought she had found paradise, Alexandra wanted to see if their relationship could survive away from the warm beaches, fresh fruit and tropical sun of Phi Phi.

While Noi had never even considered coming to Sweden, he was ultimately willing to make the shift in order to stay with Alexandra, who wanted to continue studying in Sweden.

Noi’s positive attitude saw him through the first few weeks without work and through his charm and enthusiasm he has now got himself a full-time job and is working hard at learning Swedish at evening classes.

While Alexandra and Noi are happy in Sweden for the moment, there are already indications that the relationship’s trajectory will also differ from the usual one-way trip facing the objects of Viking conquests.

“Who knows?” ponders Alexandra when reflecting on what lies ahead for her and Noi.

“We might go back and live in Thailand or end up in Australia.”