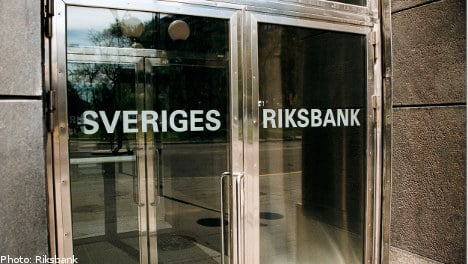 “They raised rates as expected and they also raised the repo rate quite properly, which we think is correct and also was expected by the market,” Annika Winsth, chief economist at Nordea, said regarding the Riksbank’s announcement.

According to Winsth, the Riksbank is expressing the view that the Swedish economy is developing stronger than global markets.

“That is what we have seen since the last meeting, that it is stronger than the US, for example. And they have realised this, so that is why they made this decision and we think that is correct and proper,” she said.

The Riksbank also revised up its forecast for the development of its key interest rate. In the second quarter the repo rate is expected to average 1.7 percent, an upward revision from the December assessment of 1.6 percent.

In the first quarter of 2012, the rate is forecast to be 2.5 percent compared with 2.2 percent. In the following year, the Riksbank anticipates having raised interest rates to 3.6 percent.

The decision to raise rates on Tuesday was not however unanimous among members of the Riksbank board.

Two members of the Riksbank’s executive, Karolina Ekholm and Lars E.O. Svensson, expressed their reservations against the decision to raise rates, as well as the decision to write up the trajectory of the interest rate.

“So there is a divided view on the executive board,” Annika Winsth concluded.

The Riksbank expects GDP to grow by 4.4 percent this year, unchanged from the previous forecast. GDP is seen rising by 2.4 percent in 2012, a marginal upward revision. The following year, GDP is expected to increase by 2.5 percent.

“International growth is contributing to rising energy and commodity prices. The higher prices temporarily push up inflation in Sweden, but are also expected to indirectly continue affecting inflationary pressures throughout the forecast period,” the Riksbank wrote in a statement on Tuesday.

However, the stronger Swedish krona has contributed to dampening underlying inflation.

The Riksbank has also revised its estimates on unemployment. It now expects the unemployment rate at an average 7.3 percent this year, 6.8 percent next year and 6.4 percent in 2013, 0.2 percentage points lower than the previous assessment for all three years.

Market interest rates fell, while the krona strengthened against both the euro and the dollar immediately after the Riksbank’s interest rate change and revised forecast were announced.