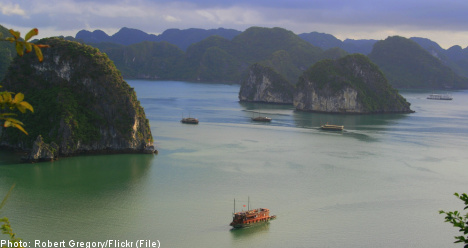 He said they were in their early 20s. The women were in Vietnam as part of a tourist trip and are reported to be from central Sweden.

Their next of kin were on Thursday informed of their deaths.

The Swedes were among 12 people, most of them foreign tourists, who died when their boat suddenly sank while they slept in the bay, a UNESCO World Heritage site renowned for its striking limestone towers.

The other dead tourists are reported to be from Denmark, the UK, the US, France and Russia.

Vu Van Thin, a senior official with the Quang Ninh province People’s Committee, the local government, said the accident happened when “part of the boat suddenly broke”, but bad weather was not to blame.

According to local media the boat was crossing the bay when it experienced engine trouble and sank.

The police are involved in the incident and are working to ascertain the cause.