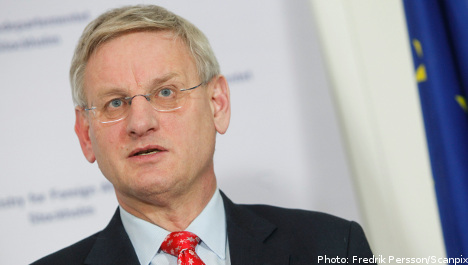 Bildt thus rejected the findings in a report published by the Expert Group for Public Economics (ESO) on Saturday which argued the contrary, while conceding that he had not yet read the report.

“No. For the simple reason that we are talking about 130 million kronor ($20.3 million), that is a lot of money in our world,” Bildt told news agency TT on a visit to Riga, referring to the savings required to balance the books at the foreign ministry.

Economist Richard Murray wrote in the Dagens Nyheter daily that the closure of the Swedish embassies could be avoided if the UD became more efficient, writing that the foreign ministry’s operations have a number of shortcomings that give scope for savings.

ESO, which is an independent research body under the auspices of the finance ministry, concluded in its study that the foreign ministry is too large and top-heavy and is in need of reorganization.

Murray argued that development aid should be given its own department and trade affairs should be transferred to the enterprise ministry.

Bildt however said that there is an “ongoing operational development ” at the foreign ministry, despite the fact that the report observed that no such process existed.

The report also claimed that IT structure is substandard, a situation to which Carl Bildt himself has several times commented upon on his blog, describing the system as ready for the museum.

When asked by TT what he, as the boss, planned to do about it, Bildt replied:

“The government offices are integrated, we have no independent IT structure, and it can be quite frustrating,” said Bildt, adding that IT is managed by the administration department.

Carl Bildt did however concede that some of the problems of flexibility and organization can be solved with the review now in the process of being completed and whose proposals will them be implemented.

The final report on the ministry’s operations will be submitted Peter Egardt in early March.