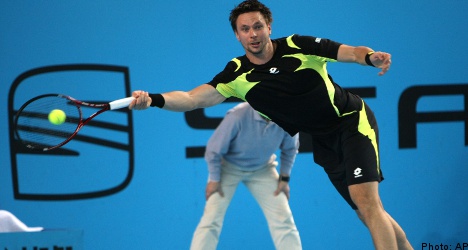 Cilic maintained his impressive run of form at the tournament with a hard-fought 6-2, 1-6, 7-5 victory over Russian Mikhail Youzhny, while Söderling downed Russia’s Dmitry Tursunov in straight sets, 7-5, 6-1.

“Overall I think it was a good match,” said Söderling.

“Physically I feel good. I wasn’t aggressive enough at the start and I told myself at the end of the (first) set that I had to be more aggressive, which forced him into making mistakes.”

“Against Cilic tomorrow (Sunday) it will be very important to serve and return well.”

Cilic, 22, had coasted into the semi-finals with a convincing victory over Czech Tomas Berdych and had the measure of Youzhny from the early stages, breaking the Russian’s serve at the outset.

It gave the big-serving Croat, the world number 28, the impetus he needed to claim the first set with relative ease.

Youzhny, the number three seed, turned the tables in the second, the Russian tightening his service game and proving more resilient on his return of serve.

A series of unforced errors and a dip in Cilic’s service game allowed Youzhny to pull ahead, win the set and tie the match.

Cilic and Youzhny both lifted their game for the decider, the Russian gaining the psychological edge when he broke the Croat at 2-2.

However Youzhny spurned the chance to take the win when Cilic saved match point at 5-3, the Croat going on to pull level at 5-5 and then winning the next two games to seal the match.

Söderling and Tursunov, the world number 129, matched each other stride for stride in the first set until the Russian double-faulted at 6-5 down to gift Söderling the set.

The second set was a much more one-sided affair, with Söderling sending down eight aces as he closed out a routine victory.