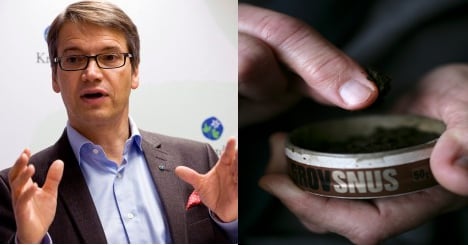 In a letter to the EU Commission in response to the so-called tobacco directive, Hägglund described the ban as “illogical” and demanded it be overturned.

Hägglund argued furthermore that the product is “significantly less damaging than cigarettes”, adding that a ban contravenes the principles of the free market

The government stance is at odds with its own experts at the Health and Welfare Board (Socialstyrelsen) and the Swedish National Institute of Public Health (Folkhälsöinstitutet).

“There are good grounds to argue the adverse health effects of snus and there is no scientific evidence to indicate that snus works to help to quit smoking,” the National Institute of Public Health argued in comments on the issue to a EU seminar in 2009.

The EU is undergoing a review of its tobacco policy, the so-called tobacco directive.

Snus is currently only permitted for sale in Sweden, among the EU countries, and there is pressure from some quarters to ease the restrictions. One line of argumentation is that snus is less damaging than smoking and can thus be part of “harm reduction” measures to aid smokers keen to quit.

The Public Health Institute, along with anti-smoking groups, rejects this argument, pointing out that its 2009 national health survey indicated that only five percent of smokers who have managed to stop have done so with the help of snus.

Furthermore, the institute pointed out, four out of ten men who snus also smoke on a daily basis or from time to time.

The issue has landed on Göran Hägglund’s table due to a recent move by the EU to shift the tobacco issue from one of trade to a health matter.